RSpec is the most popular testing framework for Ruby
RSpec-rails which is an extension of RSpec allows you to write controller, views, helpers and model tests in isolation.
It also provide capability to write integration tests with selenium (using capybara)

Test Driven Development is not necessarily about the correctness of the code but more for the betterment of the design. So the software is more maintainable overtime and you can write highly cohesive and loosely coupled classes.

TDD coding cycle is red/green/refactor. Which means make sure your test fails first (i.e. red), then you see your test passing (green) and then refactor your code (refactor)
Don't try to refactor too much before you seeing a passing green test

3. Test the Interface NOT Implementation

Test in a way that when internal implementation of your code changes or things your test doesn't care changes then test still passes. Otherwise after every refactor you do, your tests will start getting unnecessary failures and making refactor a big pain.
Who wants to fix 300 failures for a minor refactor

4. Test only One thing iN iSOlation

While you are testing you will tempted to have multiple assertions within the same test. Resist it :)
This allows you to make sure your tests are atomic and  helps you in refactoring. You see the failed test, you know exactly which assertion your code is failing on.

5. Force Yourself to write TEST First

Tools We are going To USE

This will start the spork server
On  a separate console window 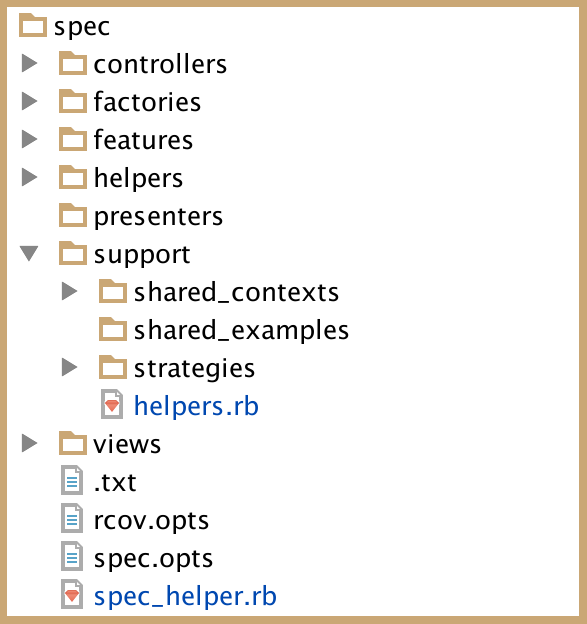 This file does the loading of the rails, factories, source files and spec support files. This is also in our case initializes the global variables for our app like @app, @library and @resource

There is a very little info on view specs because generally Rails developers don't write view specs. They rely on integration tests or controller tests to render views.
But in our case, isolated view tests can be very useful since our views have lot of logic, secondly integration test is very difficult because of the legacy system.

Testing helpers and presenters are much easier then controller and views since they are very isolated.
You will notice an issue while testing helpers is that we don't pass global variables to our helpers but just expect that to be there and that is a problem we should fix wherever we can.