5 skills of a good ux designer

You can sketch just about anything by combining one or more of the letters in the visual alphabet. 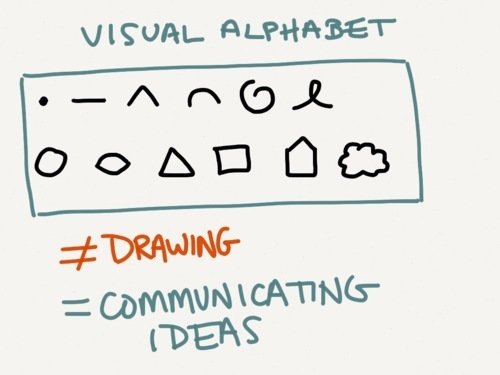 The SQVID framework is a simple tool for looking at a problem from multiple viewpoints. 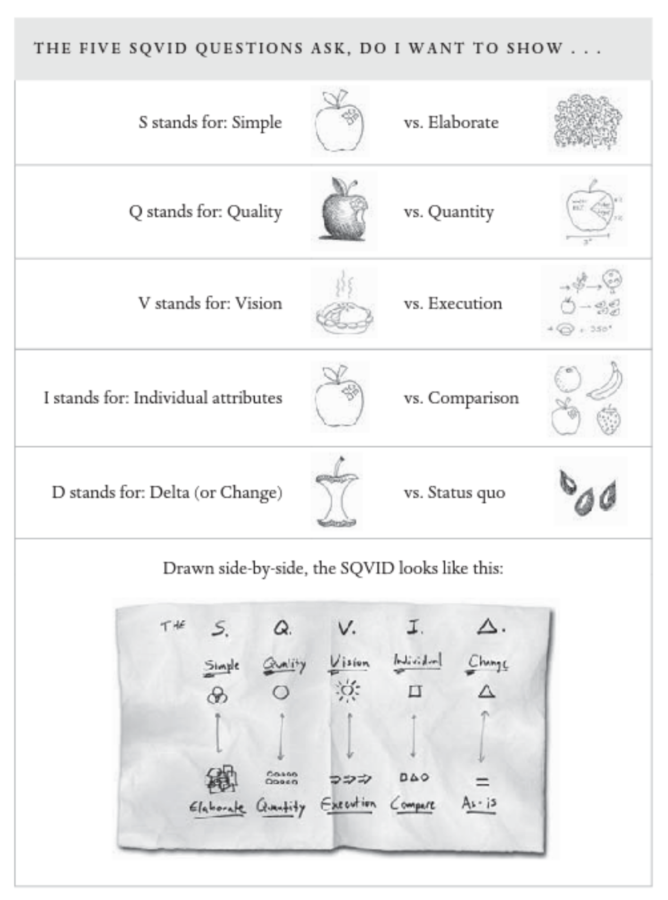 The F.A.B.I. grid is a collaborative note-taking exercise, useful for capturing and displaying information that the group can analyze and use in later activities. 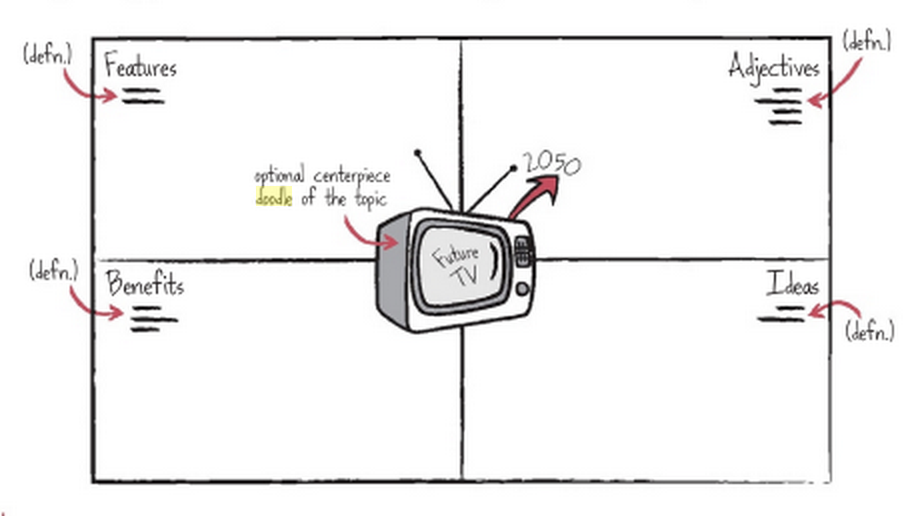 Arm each member of the group with a pad of post-its and a marker. Divide a large sheet of paper or whiteboard into four quadrants, and draw a representation of the topic in the centre (e.g. the future of conferences).

During the presentation, members of the group should capture Features, Adjectives, Benefits, and Ideas that occur to them listening to the topic. 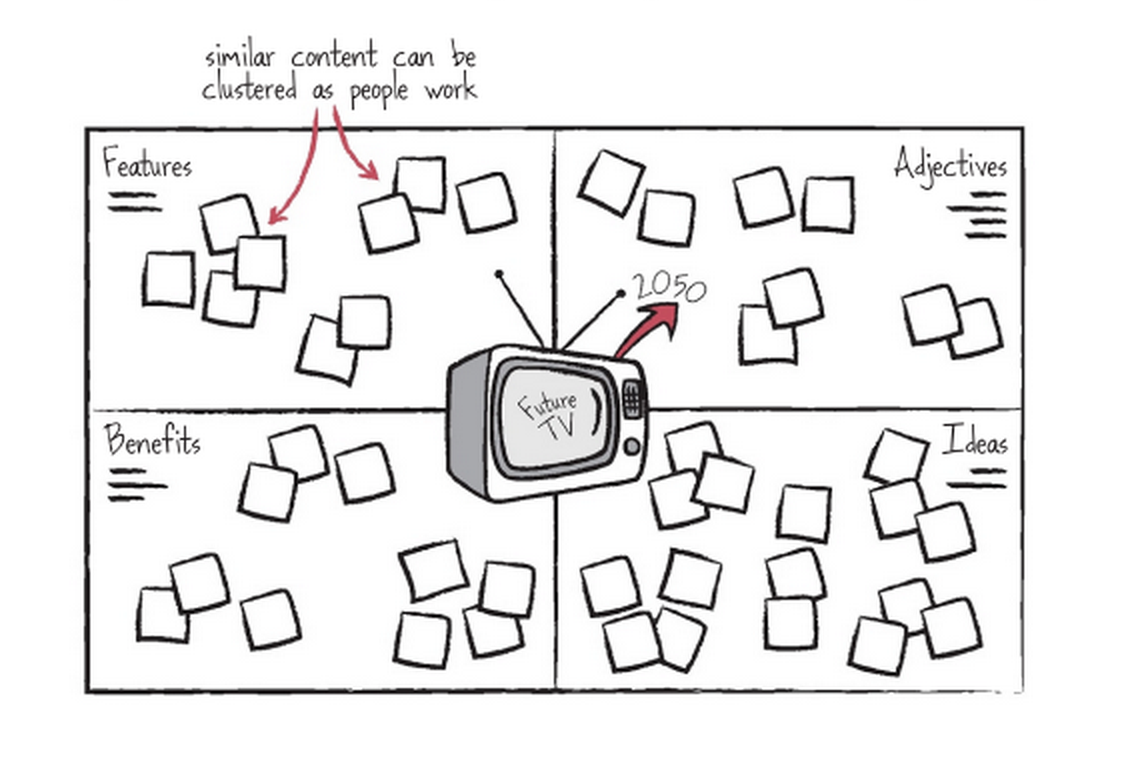 At the end of the presentation, thank the presenter, allow the participants to reflect on the notes made, find groupings or natural patterns, and encourage conversation to explore any new ideas that may have been sparked. : )

Design the box is a group activity to help elicit features, benefits and selling points of a product, service or organisation.

Ask participants to design the box for a product. On the front of the box, they should include:

On the back of the box, they should include:

The game should be played with a physical box, post-it notes and thick markers (thick so people don’t go into a lot of detail).

Start by explaining what the aims of the activity are – to come up with ideas and features for a product and succinctly describe them. Explain the product or service idea. You may want to provide a lot of background, so participants focus on their ideas in some detail.

Or you may want to provide only very sketchy background so participants focus on generating high level ideas.

Get people into teams (teams of 3-5 work well).

Allow enough time for the teams to discuss the idea, focus on what they would like to present, and prepare their box.

This may take anywhere between 15 minutes and an hour, depending on the complexity of the topic.

When everyone has prepared their box, ask each team to explain what they have created and some of their rationale. 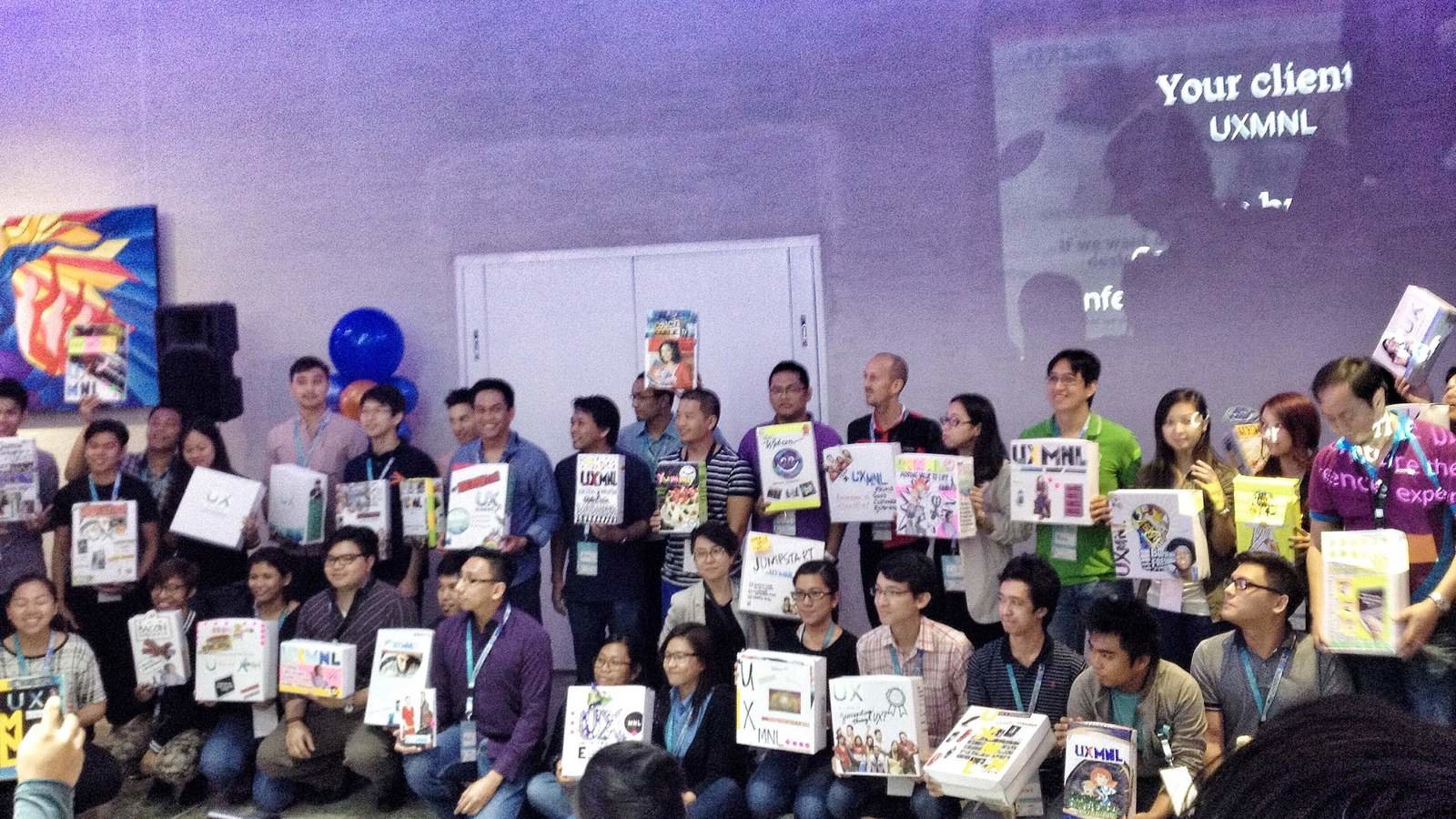 Attendees showing off their boxes! 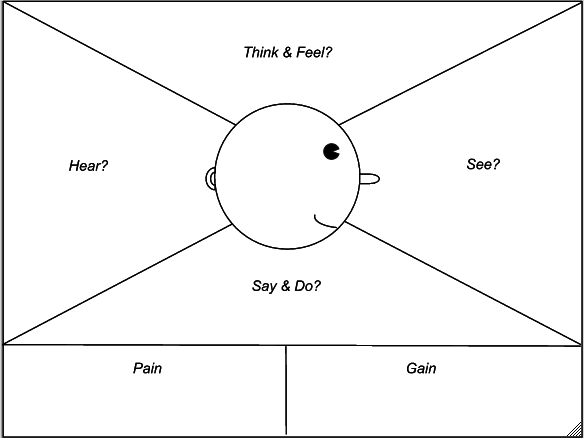 Empathy map is a collaborative activity to quickly create a customer or user profile. While not based on user research. It fulfils the goal of encouraging team mates to exercise more empathy for the user, while revealing insights and potential opportunities for innovation. 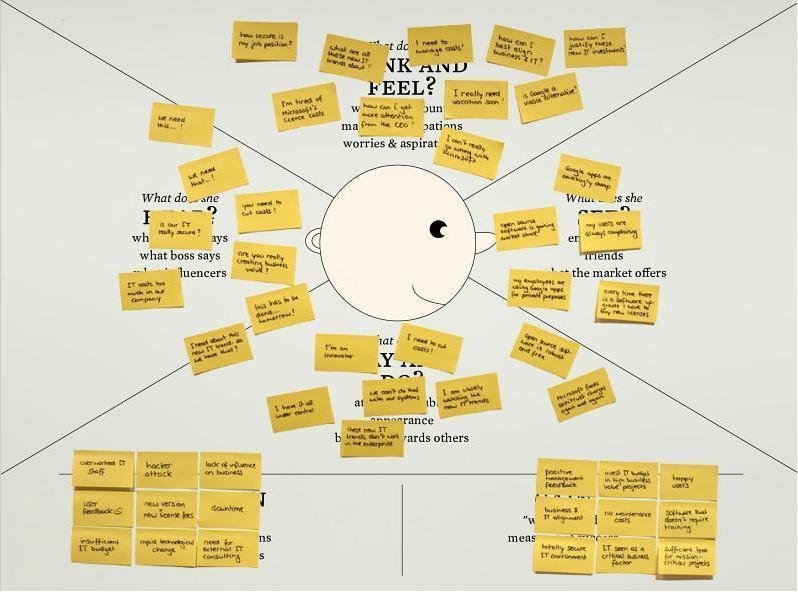 Throughout the game, have your players write their ideas about the character's experiences on sticky notes, which they will then stick onto the respective section of the empathy map!

Visual stimulus is an activity that presents structured series of imagery to elicit ideas together.

This activity requires a considerable amount of preparation.

1. Identify opportunity areas. This could be done by surveying participants ahead of the day, or by performing user research that uncovers insights about the behavior of the organization's users or customers.

2. Prepare a range of imagery for participants to respond to. This could be printed onto A4 sheets. The imagery should be grouped into the following categories. There should be at least 5 images in each category. Keep the images well organized and together in their categories.

3. The facilitator should act as timekeeper. Allow 5 minutes for each category. Once the click is ticking, participants should write down ideas in response to the imagery.

4. Determine ideas worth pursuing. When all categories have been explored, teams should perform an affinity mapping exercise to arrange their ideas, and perform dot-voting to determine the ones worth pursuing. 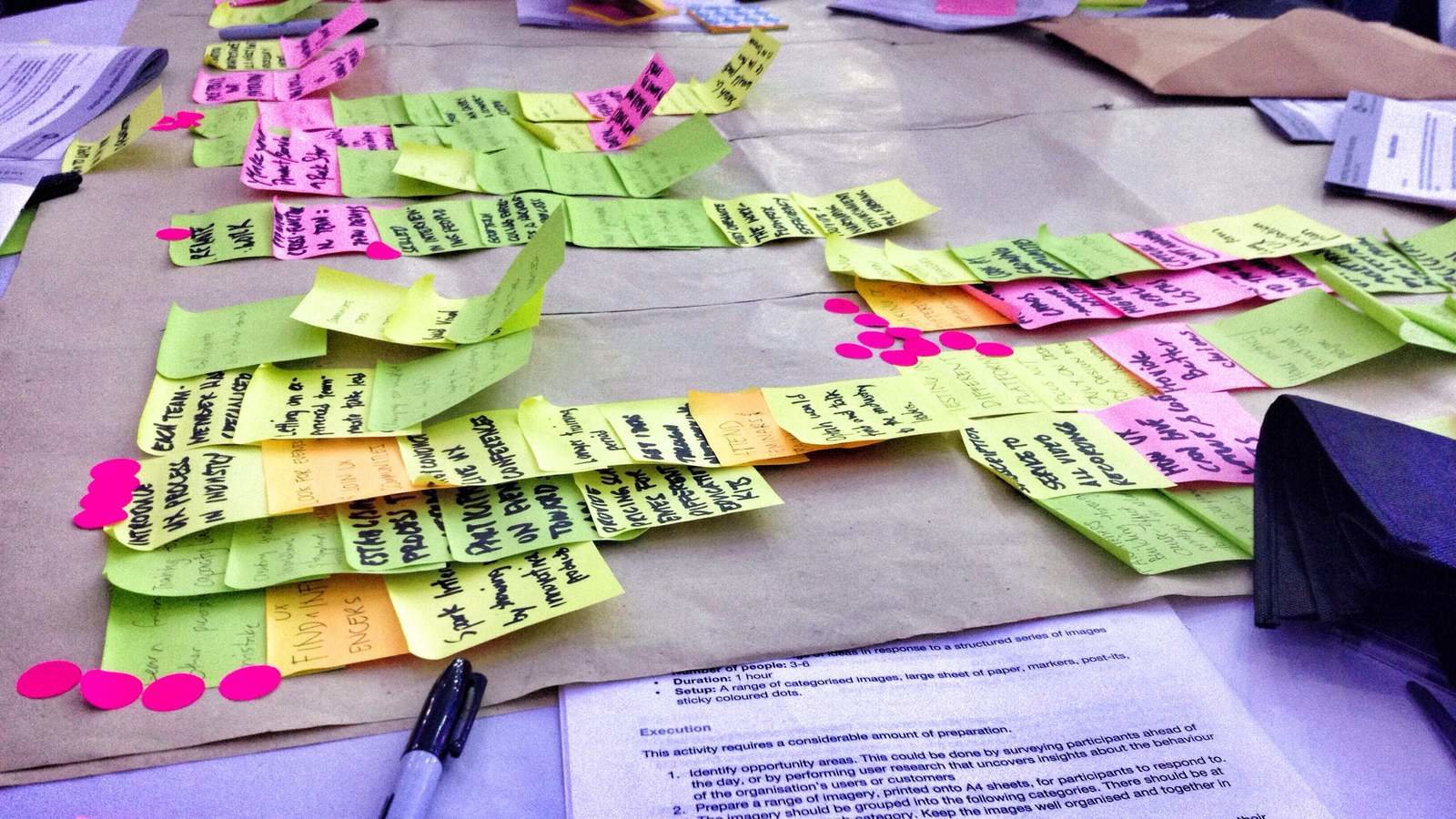 Our team's 1 hour worth of brainstorming *phew*

In Design the home page, participants design the home page for a website, intranet, or application. By doing so, they identify key features and content ideas (and become more supportive of the change, as they have had the opportunity to contribute to the end result).

1. Start by explaining what the aims of the activity are – to come up with ideas and features for a website, intranet or application and sketch (or list) them.

2. Ask participants to sketch their idea for a new home page, either individually or in teams.

3. Allow enough time for participants to discuss the idea, focus on what they would like to present, and prepare their home page.

4. When everyone has prepared their home page, ask each to explain what they have created and some of their rationale.

5. If time permits, include a second iteration, where people dot-vote on each other's sketches, and prepare a second version that feeds in what they learned from the sketches.

6. Variation: Prepare a range of screenshots from other sites, both in the same industry and outside. Participants may perform dot-voting on these screenshots to indicate which aspects they do or don't like. 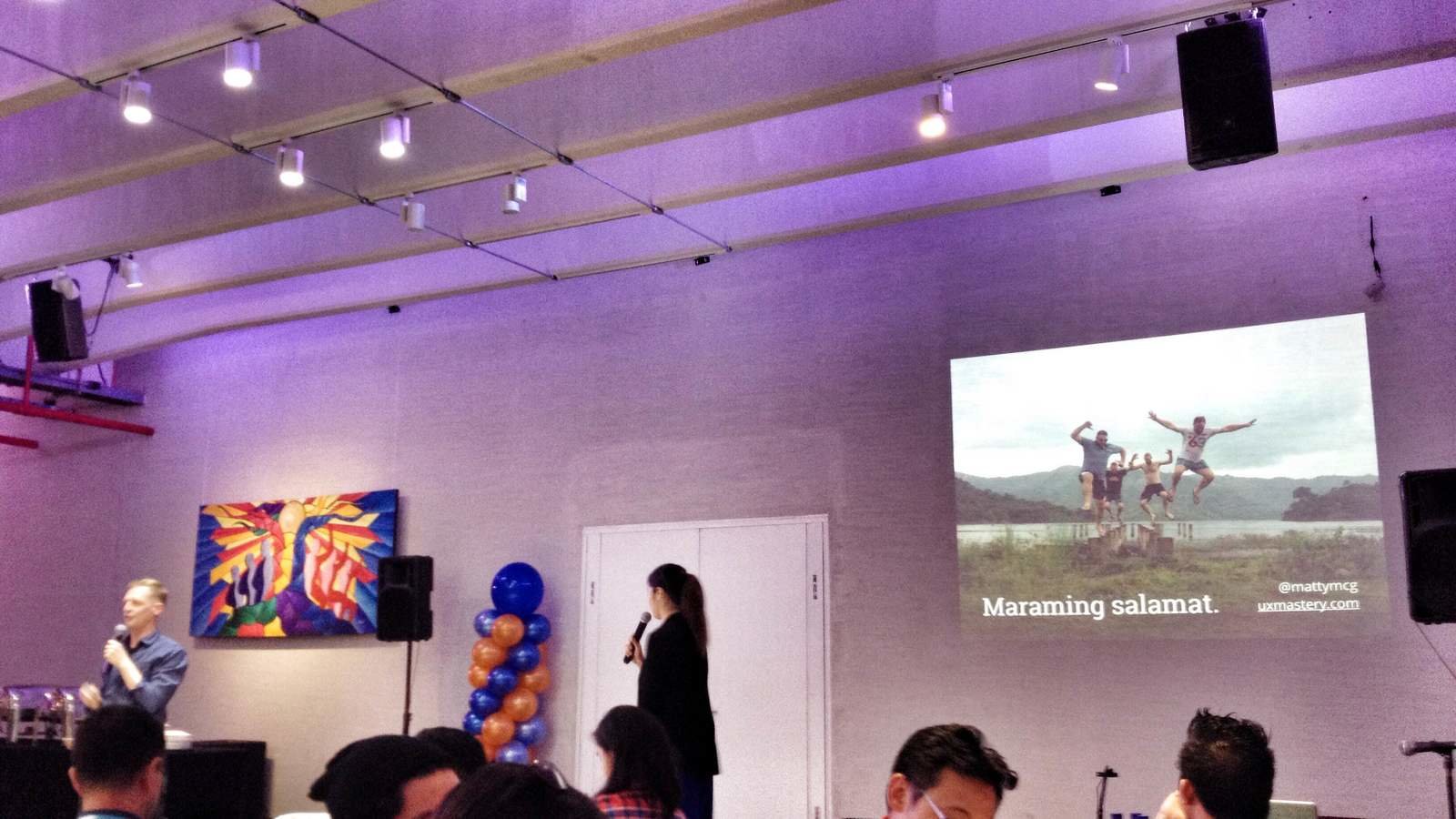 That's it! Thank you for viewing through the slides and I hope that you learned and can apply these activities. These are not just limited to User Experience design but also applicable to HR, decision making process, project management, and the list goes on.