These are all pretty much the same thing.

What is a Terminal?

A text-based command interpreter
The most common shell is "bash"
For OS X, use the "Terminal" application 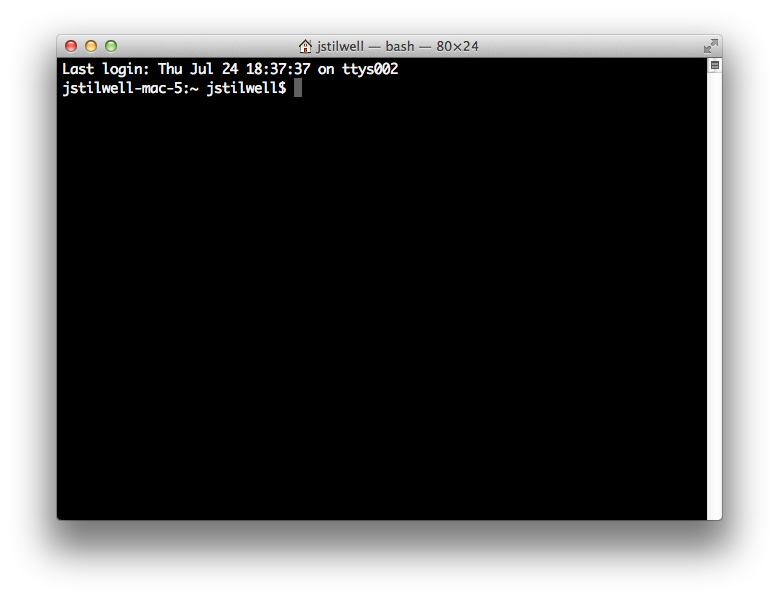 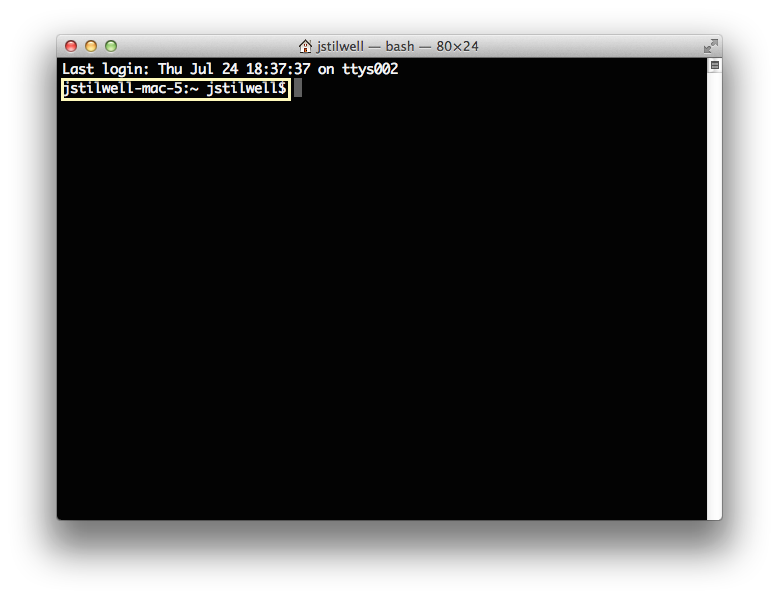 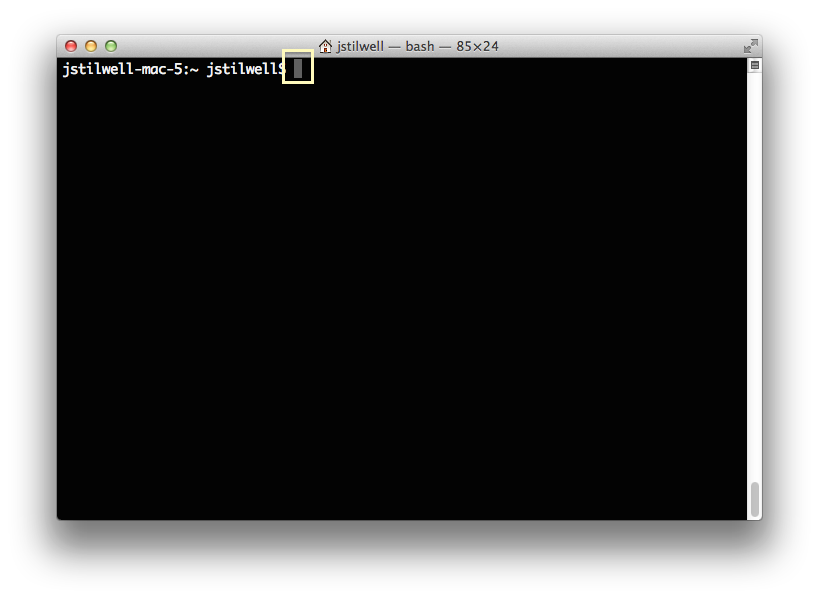 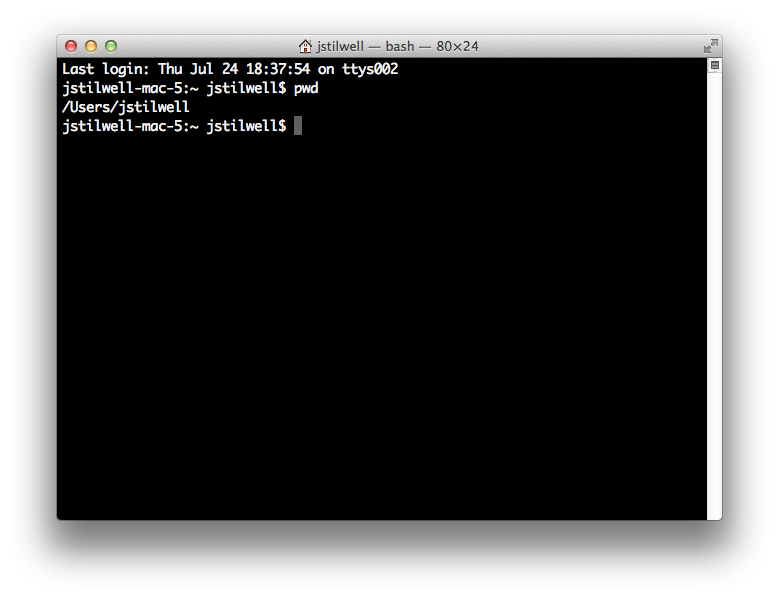 
The clear command clears the contents
of the terminal and issues a prompt.

This is good for removing previous
output that is unnecessary to the task at hand.

Feel free to use this whenever things get too cluttered.

The set of all folders, taken together,
makes up your entire file system.
This system is organized into a kind of
upside down tree.

At the very top of the tree is the root folder.


Each directory or file is separated by a forward slash "/"

There are two kinds:


It expects a file path as an "argument".

If no file path is given, it assumes
your home directory by default. 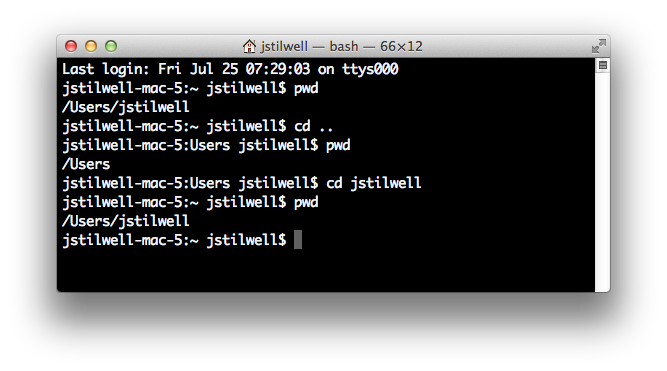 
The ls command lists the
contents of a directory.


It expects a file path as an "argument".


If no file path is given, it assumes
the current directory by default.

A flag is an special argument that
is used to set an option for the command.

These are commonly a hyphen followed by a single character (e.g. "-g")

Setting the -l flag on the ls command causes it to provide more verbose output. 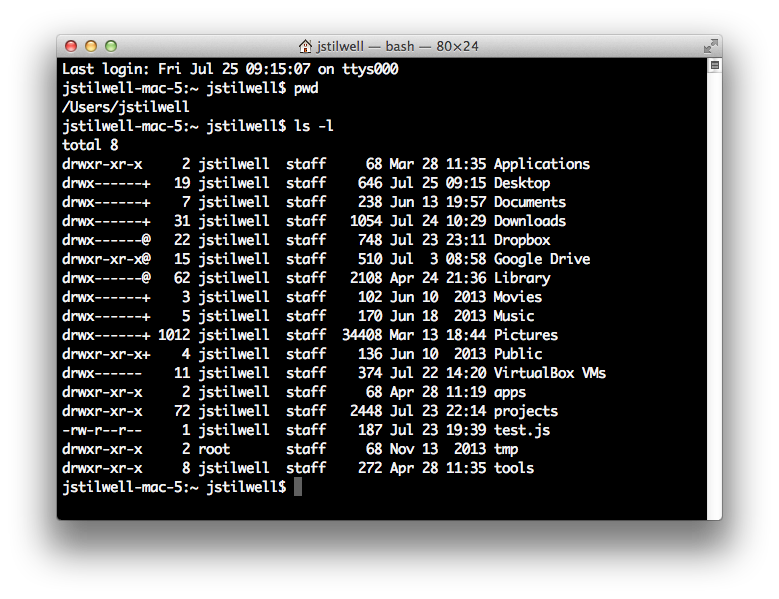 
Play with the cd and ls commands.

Be sure to incorporate:

use pwd to check your location periodically


Use the mkdir command to create a new empty directory

Pass the path of the directory as the first argument

If the base of the path doesn't already exist,
the command will fail


Use the rmdir command to remove an empty directory

Use the rm -r to remove a non-empty directory

Use less to step backwards or forwards


Filename that begin with a period
are hidden from normal output.

Use the ls command with the -a flag
to see hidden files in addition to the usual output.

Type ls -la into your terminal

Use the -h flag to get human readable file sizes 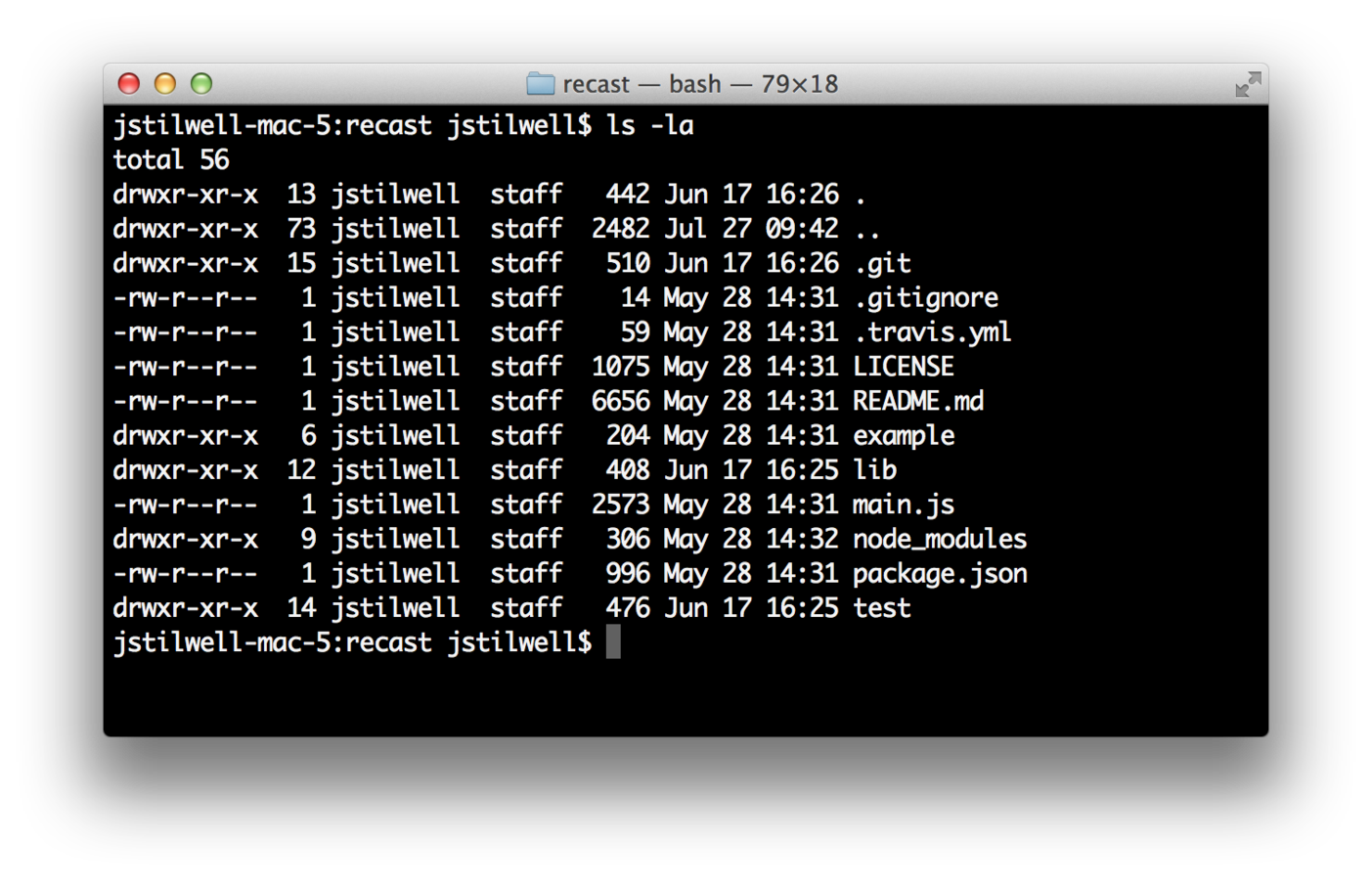 
Use chmod to change
permissions on a file/directory

The argument has three sections:


Most commands display their results to
a mechanism called the standard output.

By default, this directs its content to the display.

The standard output can be redirected to
a file using the > operator.


In order to append to the file instead of overwriting it, use the >> operator instead.


Whenever commands accept keyboard input, it's likely they are really just drawing input from a mechanism called standard input.

By default, this is set to keyboard input.

The input to a command can be redirected to
a file by using the < operator.

Both input and output can be redirected at the same time.

Pipes are placed between commands.

The grep command outputs only the
lines from a file that match a given pattern.

This is useful for doing text searches within a file.

The first argument is the pattern to match
The the second, third, and so on are files to search within

e.g. grep "ls" .bash_history
If no file argument is given, it
will expect input from the keyboard

Commands whose behavior follows the pattern:

Check out the man pages for the following

Whenever a command is executed, a new process is created

Provides an up-to-date feed of information
on the most active processes across the machine.
Useful for finding processes that are hogging the CPU


The ps utility displays all of your
processes that have controlling terminals. 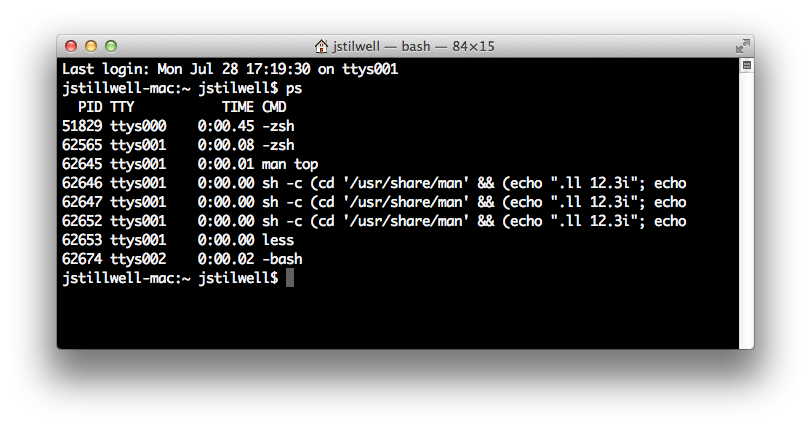 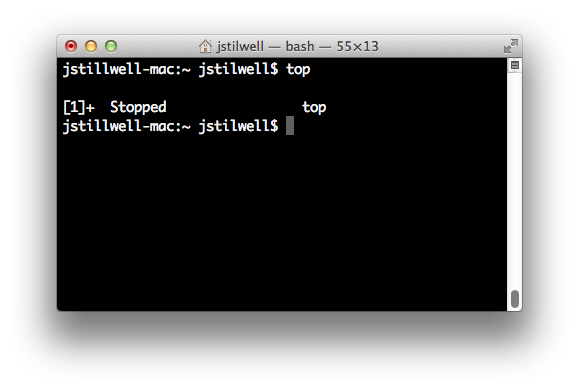 
The bg and fg commands bring a suspended process back into a running state.

bg runs it in a background process

fg runs it in the foreground of the current terminal

By default they target the most recently suspended process.

The job number can be provided as an argument.
(The number we saw when we suspended the process)


The kill command terminates
or sends a signal to a process

It takes the process id (PID) as an argument

You can find the PID using top or ps


Typing ! followed by the name of command

will repeat the last line that began with that command


In both instances, you should get the same
output because the second line is simply repeating the first

Type !! by itself will re-run the last line entered


The terminal keeps an ongoing log
of all the commands you've run.

The history command prints the
contents of the history file 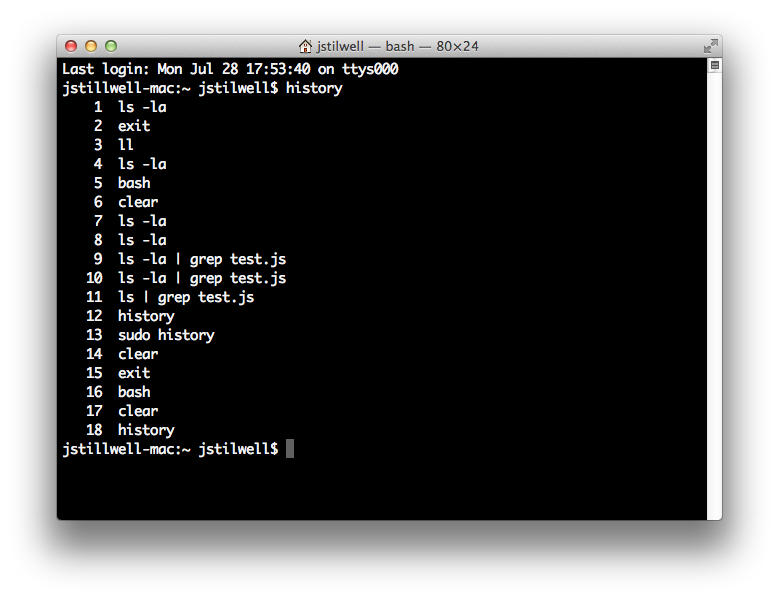 
You can run a previous command
using the number in the history.

Almost no one does this


Ctrl+a moves the cursor to the beginning of the command

Serve up a Directory

don't forget: you can Ctrl+C to exit

Check out Pro Git for a crash course on command-line git
Initialize the current directory as a Git repository
git init .
Include all changes next time we commit
git add --all
Commit the changes
git commit -m "Hello Git!"
View the commit history
git log

For those wanting to go deeper down the rabbit hole,
check out these resources. 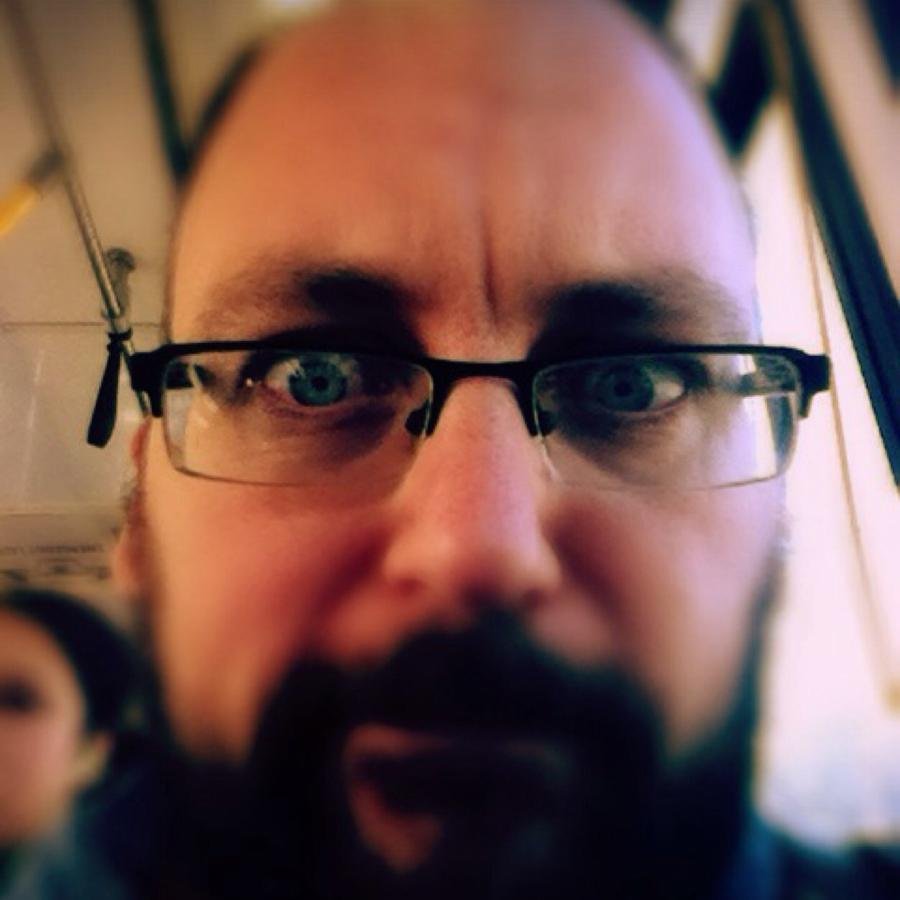 Hit me up with questions.