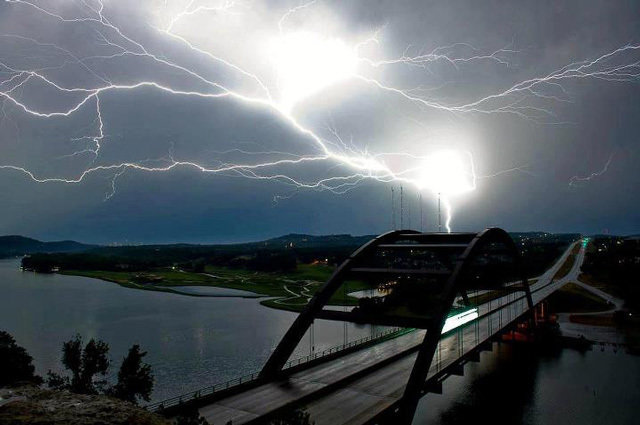 Lightning is a sudden electrostatic discharge during an electrical storm between...

The charged regions in the atmosphere temporarily equalize themselves through this discharge referred to as a strike if it hits an object on the ground, and a flash if it occurs within a cloud.

Lightning causes light in the form of plasma.

Plasma is one of the four fundamental states of matter. It's like a gas, but it's made up of free electrons and ions of an element. It generally occurs at very low or very high temperatures.

Plasma is the most abundant form of ordinary matter in the Universe. It's what stars are made of.

Lightning causes sound in the form of thunder.

The sudden increase in pressure and temperature from lightning produces a rapid expansion of air. This expansion of air creates a sonic shock wave, similar to a sonic boom.

Since the sound originates from different parts of the lightning strike, it can sometimes arrive at different times making it sound like a slow rumble.

On Earth, the lightning frequency is approximately 40–50 times a second or nearly 1.4 billion flashes per year, and the average duration is 0.2 seconds made up from a number of much shorter flashes (strokes) of around 30 microseconds.

About 70% of lightning occurs over land in the tropics where atmospheric convection is the greatest. This occurs from both the mixture of warmer and colder air masses, as well as differences in moisture concentrations, and it generally happens at the boundaries between them.

Sound travels at about 768 miles per hour.

You see the light from lightning pretty much instantaneously, and sound travels about a mile in 5 seconds. So if 15 seconds pass between when you see the lightning strike and when you hear the thunder, it's about 3 miles away.