University of Texas at Dallas

”Survey" is used most often to describe a method of gathering information from a sample of individuals. This "sample" is usually just a fraction of the population being studied.

A "survey" is a systematic method for gathering information from (a sample of) entities for the purposes of constructing quantitative descriptors of the attributes of the larger population of which the entities are members.  (Groves et al. 2009)

The word "systematic" is deliberate and meaningfully distinguishes surveys from other ways of gathering information.

The phrase "(a sample of)" appears in the definition because sometimes surveys attempt to measure everyone in a population and sometimes just a sample.

Harry Truman displays a copy of the Chicago Daily Tribune newspaper that erroneously reported the election of Thomas Dewey in 1948. Truman's narrow victory embarrassed pollsters, members of his own party, and the press who had predicted a Dewey landslide. 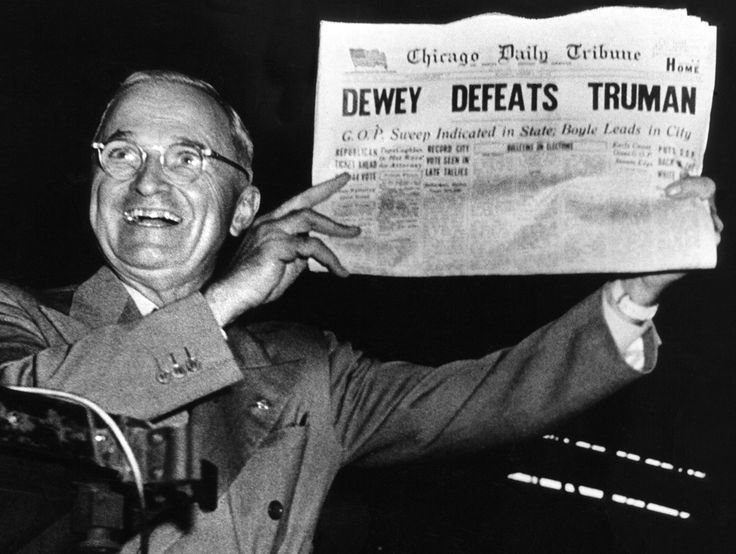 The purpose of survey is to produce statistics, that is, quantitative or numerical descriptions about some aspects of the population in study.

The main way of collecting information is by asking people questions; their answers constitute the data to be analyzed.

What is survey methodology?

Survey methodology seeks to identify principles about the design, collection, processing, and analysis of surveys that are linked to the cost and quality of survey estimates.

What is survey methodology?

This means that the field focuses on improving quality within cost constraints, or, alternatively, reducing costs for some fixed level of quality. “Quality” is defined within a framework labeled the total survey error paradigm. Survey methodology is both a scientific field and a profession. (Groves et al. 2009)

Survey as
demand and supply of data

To start a new survey: 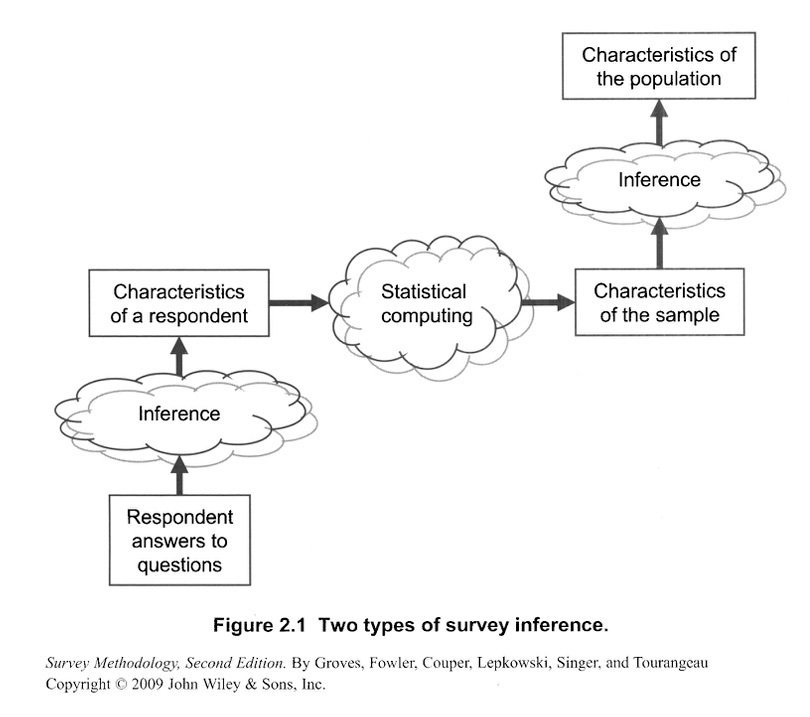 It is imperative to understand the concept of inference and how much the respondents provide: 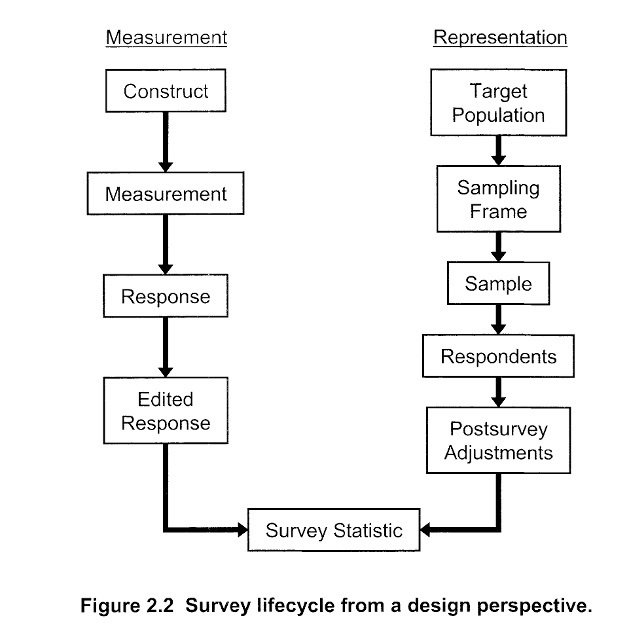 Start designing by thinking of the answers

Places open-ended question at the end of a section.

When the question may not provide an exhaustive list of answers, provide open-ended choice.

Some researchers prefer even number of choices to avoid tendency to choose the middle answer. If the question begs for a more definite positioning of the respondent, use even number.

Some questions are more difficult for choosers, allow odd number in this case.

Learn from the giants

Borrow from existing surveys such as GSS, ANES, TEDS since they are well tested and crafted by experienced researchers.  Alternatively, modify or adapt from the question wording styles.

Allow space for respondents to feel comfortable.  Make the page look professional with elegant design.  Try multiple color (but not too many).

"Ambiguity is the ghost most difficult to exorcise from survey questions."

- Tourangeau, Rips, and Rasinski (2000)
The Psychology of Survey Response

Respondents must use mental processes to read and understand a question (along with any relevant instructions), inferring the main idea of the question and identifying what the researcher is looking for regarding a response.

Problems with comprehension arise when respondents:

A retrieval strategy might be the particular way in which we attempt to remember something. For example, if you were asked to think of as many parties as you can, you might think in terms of political leaders.

Respondent Willingness and Ability to Participate in a Survey

How well a sample represents a population depends on the sample frame, the sample size, and the specific design of selection procedures. If probability sampling procedures are used, the precision of sample estimates can be calculated.  (Fowler 2009) 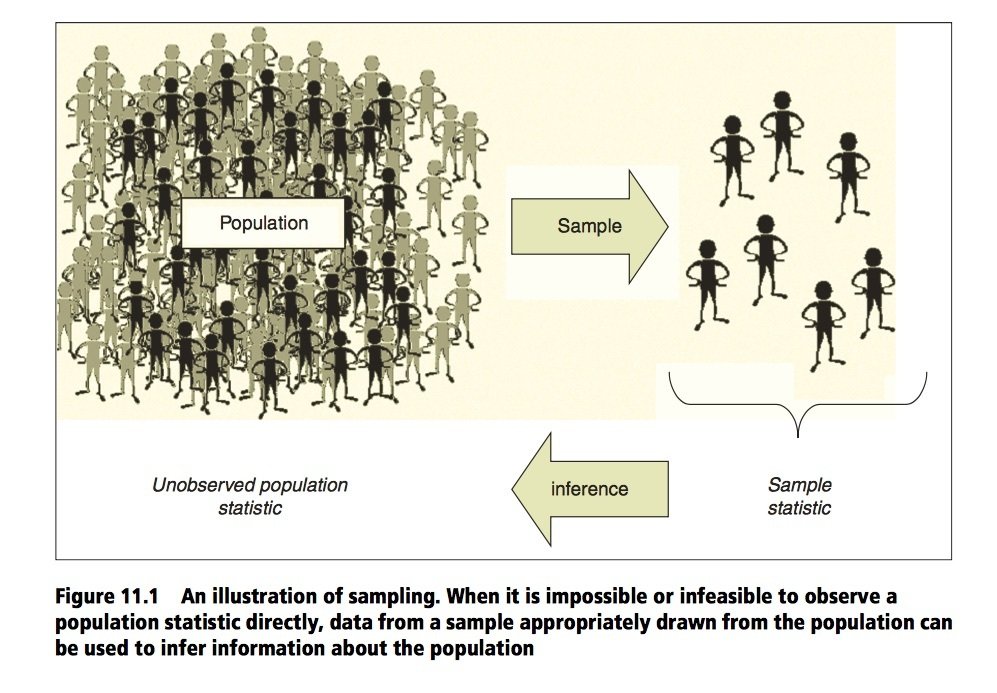 A probability-based sample is one in which the respondents are selected using some sort of probabilistic mechanism, and where the probability with which every member of the frame population could have been selected into the sample is known.

Non-probability samples, sometimes called convenience samples, occur when either the probability that every unit or respondent included in the sample cannot be determined, or it is left up to each individual to choose to participate in the survey.

Snowball sampling is often used when the desired sample characteristic is so rare that it is extremely difficult or prohibitively expensive to locate a sufficiently large number of respondents by other means (such as simple random sampling). Snowball sampling relies on referrals from initial respondents to generate additional respondents. While this technique can dramatically lower search costs, it comes at the expense of introducing bias because the technique itself substantially increases the likelihood that the sample will not be representative of the population.

Judgement sampling is a type of convenience sam- pling in which the researcher selects the sample based on his or her judgement. For example, a researcher may decide to draw the entire random sample from one ‘representative’ Internet-user community, even though the population of interest includes all Internet users. Judgment sampling can also be applied in even less structured ways without the application of any random sampling.

For probability samples, the surveyor selects the sample using some probabilistic mechanism and the individuals in the population have no control over this process. In contrast, for example, a web survey may simply be posted on a website where it is left up to those browsing through the site to decide to participate in the survey (‘opt in’) or not. As the name implies, such non-probability samples are often used because it is somehow convenient to do so.

‘Literary Digest’ mailed 10 million straw- vote ballots, of which 2.3 million were returned, an impressively large number, although it represented less than a 25 percent response rate. Based on the poll data, ‘Literary Digest’ predicted that Alfred Landon would beat Franklin Roosevelt 55 percent to 41 percent. In fact, Roosevelt beat Landon by 61 percent to 37 percent.

Gallup used a quota sampling method in which each pollster was given a set of quotas of types of people to interview, based on demographics. While that seemed reasonable at the time, the survey interviewers, for whatever conscious or subconscious reason, were biased towards interviewing Republicans more often than Democrats. As a result, Gallup predicted a Dewey win of 49.5 percent to 44.5 percent: but almost the opposite occurred, with Truman beating Dewey with 49.5 percent of the popular vote to Dewey’s 45.1 percent (a difference of almost 2.2 million votes).


“To err is human, to forgive divine – but

to include errors in your design is statistical."

The pre and post weights have maximum values to 18.

The general weight value is under 5. 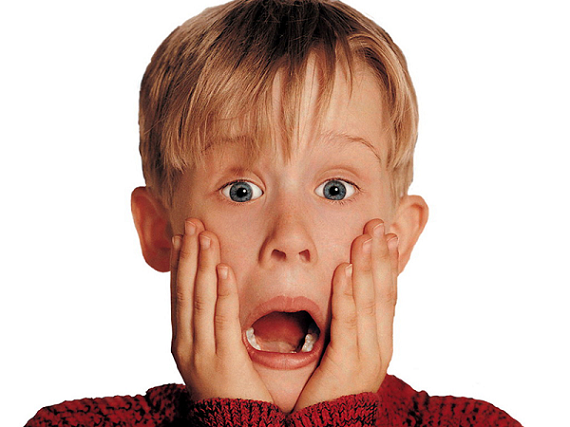 2.    Panelists were more representative of the younger population

Hong Kong population has a male to female ratio of 47:53 according to the Census.  Registered voter population however has an even distribution of 49:51. 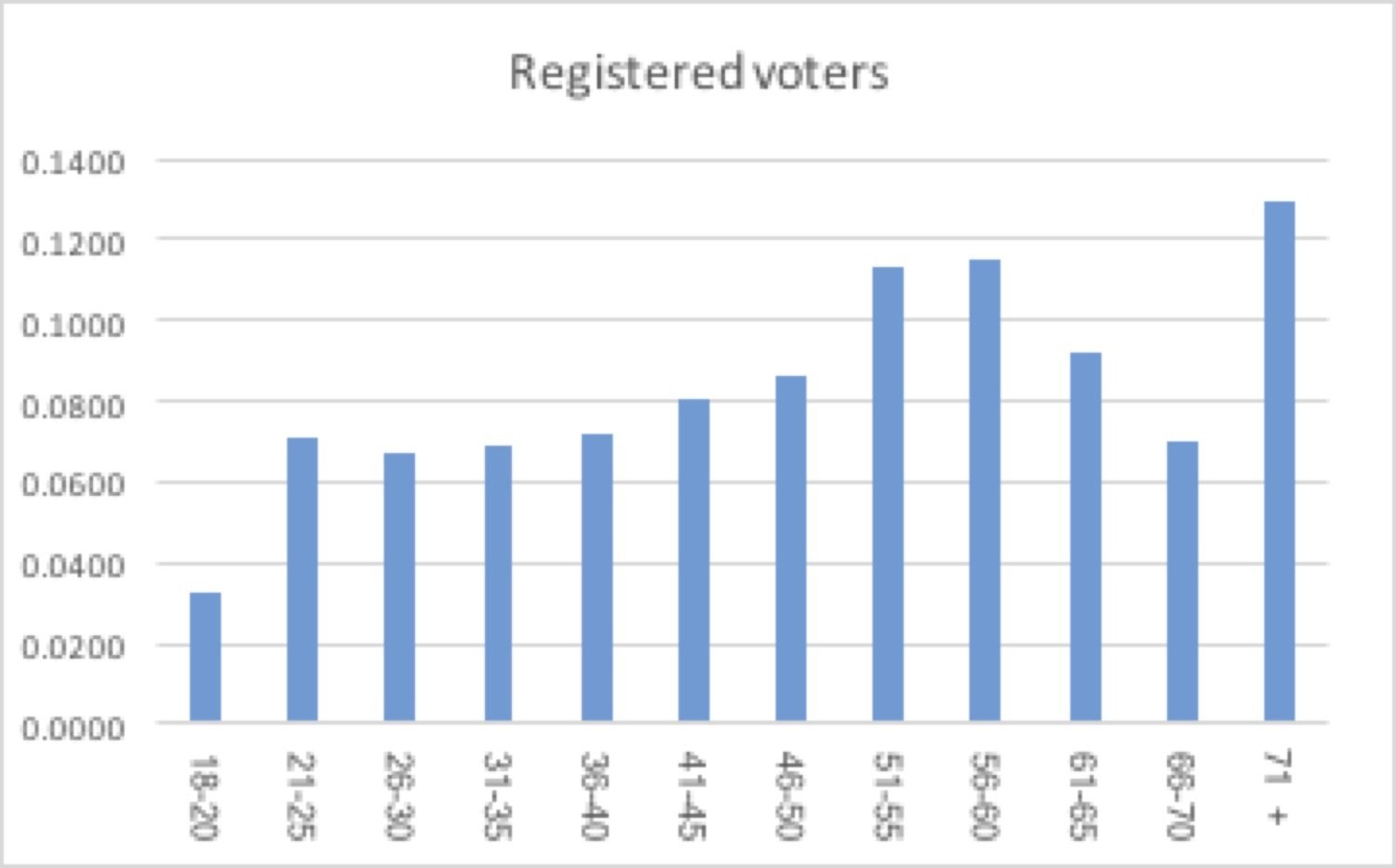 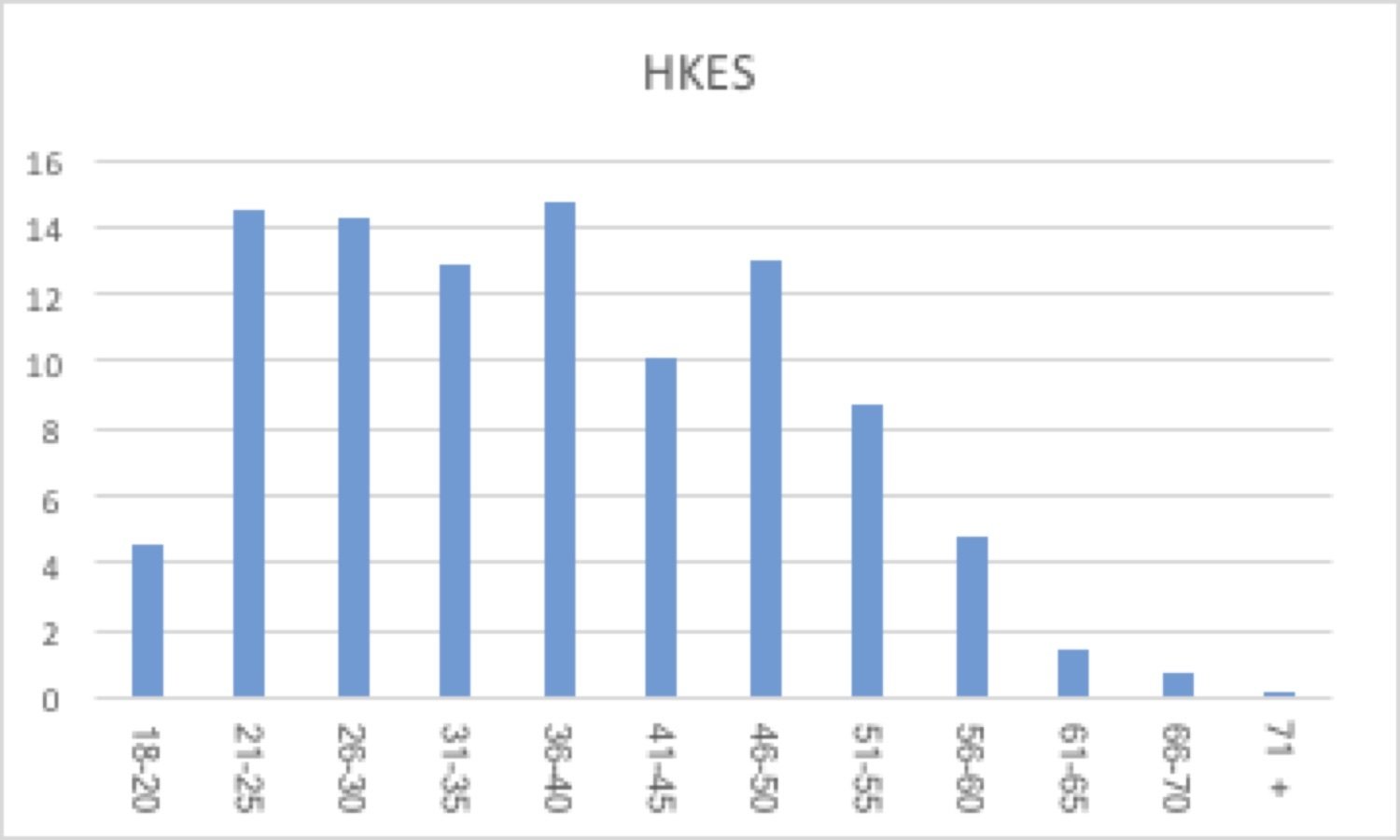 
Previous figures illustrate the big difference between the HKES sample (which has more panelists from the younger group) and registered voter population.  The latter indicates a large proportion in the elderly population.  This can be attributed to some political parties’ concerted efforts in mobilizing the elderly to register to vote. 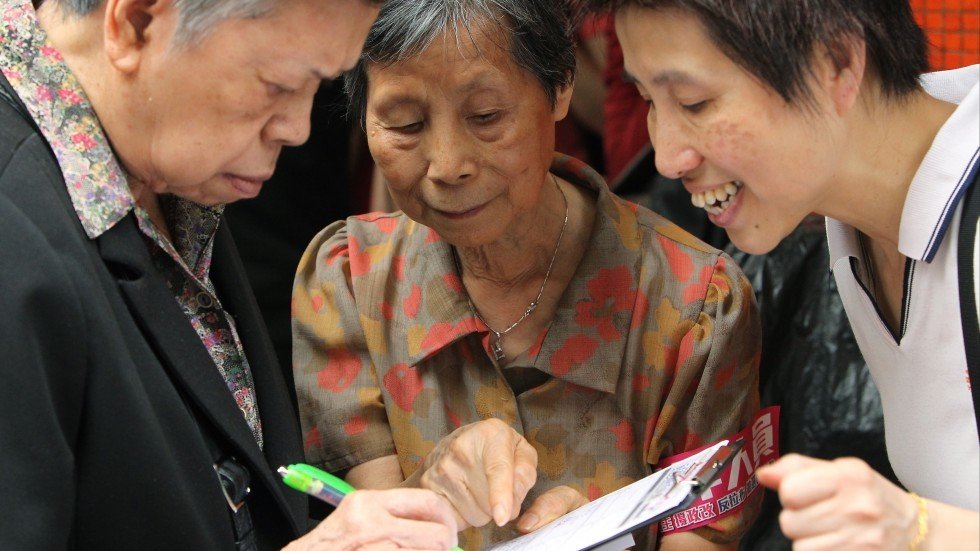 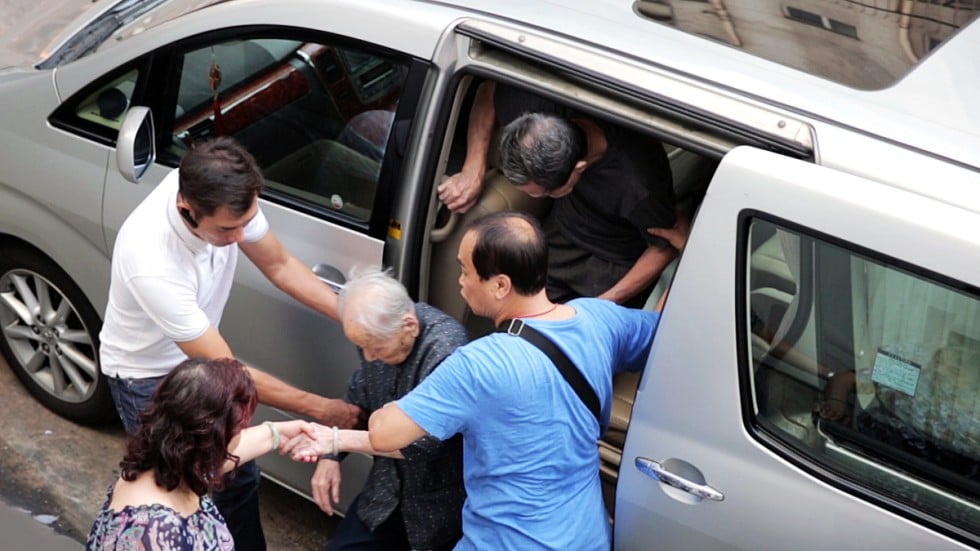 
For point 2, YouGov acknowledges that the company has more access to the younger population via their recruitment channel.  It can be due to the highly savvy and active internet user population in the younger age groups.

Another reason that can be posting a problem is using two other demographic variables education and income from other population, that can be more representative of the population or the online population but not necessary the registered voter population.


Raking is employed to generate a weight using age, gender and district only.  The range of the weight for pre wave is from .269 to 8.939.   They are slightly less varied that the original weights. 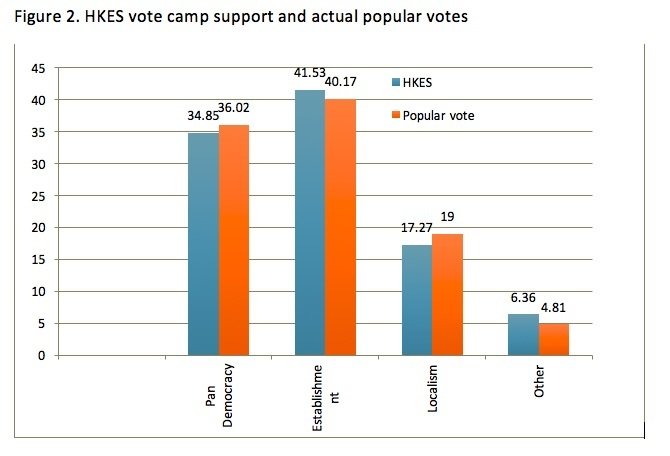