The Bureau of Investigative Journalism published case studies where details of the dead were known. For many others, though, their name is almost all that was reported about them.

Here are some of the individuals highlighted in the 50 case studies published by the Bureau.

This means around three-fifths of child drone victims have been identified so far. Sixty-seven of these names belong to children killed in a single attack, an October 2006 strike on a madrassa in Bajaur agency that killed 81 civilians. 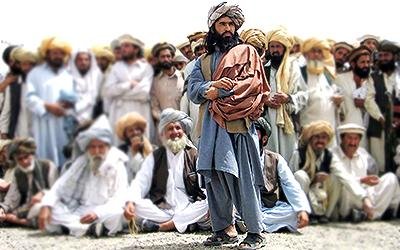 Nek Mohammed was a local Taliban commander. He was the target of the first US drone strike to take place in Pakistan, on June 17 2004. 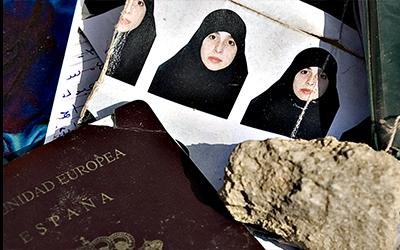 Raquel Burgos García was born in Madrid. She married Amer Azizi, a senior al Qaeda operative, and fled to Pakistan with him and their three children. She is believed to have died in a drone strike in December 2005.

​García was an only child and a happy 20-year-old, her father later told reporters. She lived in Madrid’s Barrio de la Concepción and was a journalism student when she met Amer Azizi, a Moroccan. Then 27, he had arrived in Spain after training in explosives and fighting in Bosnia. He was allegedly looking for a Spanish wife as a route to a Spanish passport. 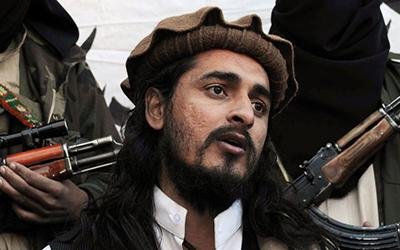 Hakimullah Mehsud was the leader of the Pakistani Taliban (TTP) for four years until he was killed in a US drone strike in November 2013.

A member of the Eshangai branch of Pakistan’s powerful Mehsud tribe, he was born Jamshed Mehsud in the village of Kotkai, South Waziristan tribal agency, in either 1979 or 1980. According to the US Specially Designated Terrorists list, Hakimullah used the alias Zulfiqar for much of his life. 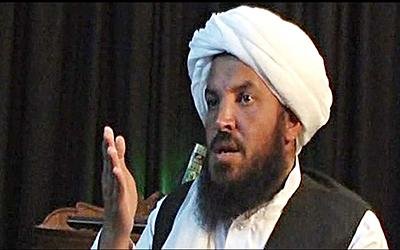 Veteran jihadist’ Abu Laith al Libi reportedly acted as al Qaeda’s chief of operations and was killed in a US drone strike in North Waziristan on January 29 2008. He was born in Libya in 1967. He became a member of the Libyan Islamic Fighting Group (LIFG), a militant group, before fighting in Afghanistan in the early 1990s.

He returned to Libya in 1994 to organise an unsuccessful coup against Gaddafi. He fled to Saudi Arabia, where he was arrested following the 1996 Khobar Towers bombings, in which 19 US military staff died. He either escaped or was released from prison in Riyadh. 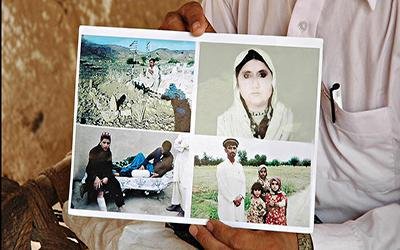 Little is known of Mamana’s life except that she was in her 60s, a grandmother, the wife of the retired headmaster of the Government High School in Miranshah, and a midwife who ‘delivered hundreds of babies‘ in her community. However the events immediately around her death have been well documented. According to detailed reporting in The Times and the BBC’s Panorama programme, among others, for days before the strike there had been the constant hum of drones overhead. Mamana and several of her grandchildren were outside the family home.  She was picking okra, gathering wood for Eid al Adha and tending to livestock when a drone struck. It is not clear how many missiles were fired. But Mamana’s eight-year-old granddaughter Nabeela was 20m away from where they hit. She told The Times: ‘I saw the first two missiles coming through the air. They were following each other with fire at the back. When they hit the ground, there was a loud noise. After that I don’t remember anything.’ 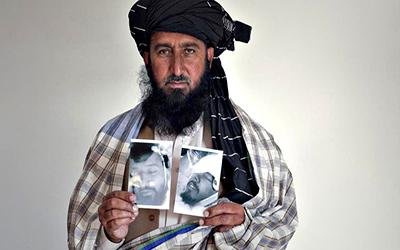 Zahinullah Khan was one of three civilians reportedly killed in an evening attack on a house on December 31 2009.

His father, Kareem Khan, later said he had been a quiet and studious boy. He had memorised the Quran and enjoyed football, cricket and hunting partridges.

He had studied in Islamabad before returning home for college. While studying he worked part-time at the local government girls’ school in Mira Khan Kot as a chowkidar, a night-watchman and caretaker. He had been in the job since 2008, his father said. He died instantly, along with his uncle Asif Iqbal and another man identified as Khaliq Dad, a stonemason. 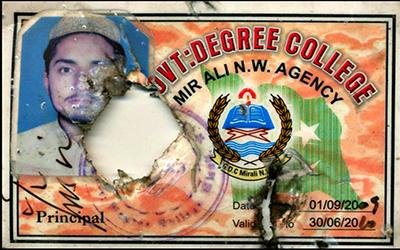 A student, Sanaullah Jan was killed with at least two others by a drone strike as they drove in a car from Miranshah to Mir Ali. Jan was a grade 11 student at the Government Degree College Mir Ali, according to a complaint filed at the UN in Geneva about his death. He was studying high school subjects preparing him to study engineering. However broadcaster Al Jazeera reported he wanted to be a doctor.

His family and friends insisted he had no interest in the Taliban. He was on his way to Miranshah from Mir Ali with two friends when the drones attacked. Their bodies were burnt too badly to recognise. But his ID card was recovered from the scene by his brother Khairullah Jan, a first-year student at the same college. 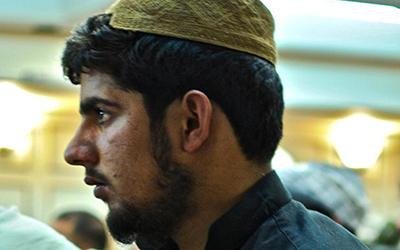 Aziz was a 16-year-old from North Waziristan, who attended a high-profile anti-drone rally in Islamabad in October 2011. Days after his return home, he was killed in a drone strike with his cousin and up to two others. Aziz was the youngest of seven children. His father Mumtaz Khan worked in UAE as a driver to support his family. He was described by relatives as a quiet 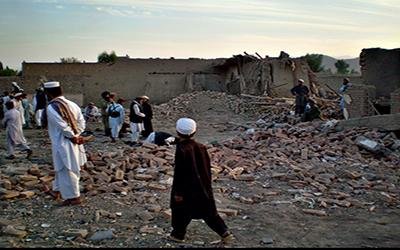 Osama Haqqani is reported to have been a ‘distant’ relative of Badruddin Haqqani, a senior operative in the Pakistani Taliban (TTP) allied Haqqani Network.

Osama died on August 21 2013 when a suspected US drone strike hit a house and a vehicle in Shnakhura, Datta Khel, North Waziristan, killing at least five and as many as 25 people, including Badruddin, the son of Haqqani Network founder Jalaluddin Haqqani. 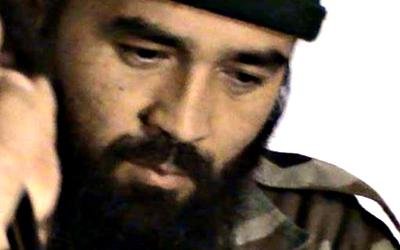 Najmiddin Kamolitdinovic Jalolov was born in Uzbekistan in 1972 and became one of the most senior Central Asian militants based in Pakistan. He was believed to be involved in planning attacks on Germany and Uzbekistan.

Jalolov (aliases Yahyo, Ahmed and Nazimuddin Khilalof) joined with other members of the Islamic Movement of Uzbekistan to form a new group, the Islamic Jihad Union (IJU). The group’s estimated 100 fighters used Waziristan as a base for training and planning, and were believed to have links to both al Qaeda and the Taliban.