How Western World leadership (Esau) will be replaced by Moshiach (Jacob) 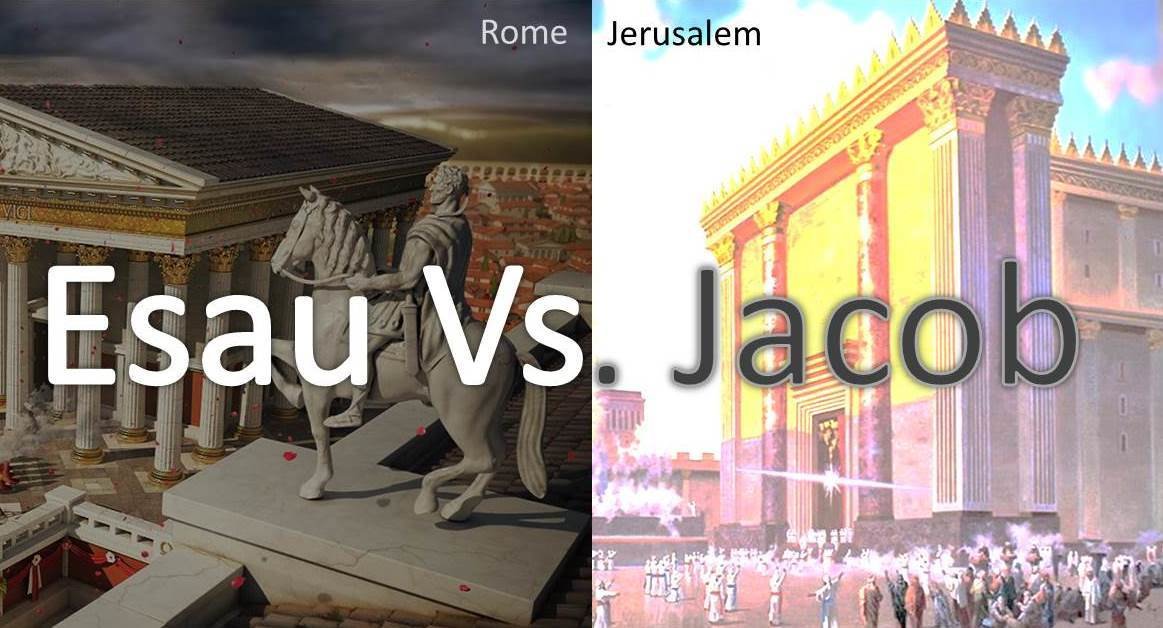 Fighting in the Womb

When one rises the other will fall.

Both are rulers, but

Jacob will eventually overtake Esau in This World, thereby bringing the Next World, where Jacob will dominate.

Esau (his descendants) was first to establish a line of kings.

6.  Saul of Rehoboth by the river

After Jehoshaphat, there were further kings to Jacob but Esau rebelled and became independent.

And this is when Moshiach comes,

At the End of Days... A Ruler [Moshiach] shall come out of Jacob and destroy the remnant of the city [Capital City of Esau].

Moshiach and his army

taking on the rest of the world?

about how this will happen:

The house of Jacob shall be fire... and the house of Esau shall become stubble.

One spark will emerge from Joseph that will consume all of Esau's Chiefs.

In the past, the world was

By the End of Days

When one rises the other will fall.

The rise of one side is what makes the other side fall.

The rise (Coming) of Moshiach is what makes the leaders of the Western World decline.

This is alluded to in the same Prophecy of Obadiah, with the concluding verse:

Deliverers will ascend to mount Zion to judge the mount of Esau, and the sovereignty will be to G-d.

When Moshiach (Deliverers*) will ascend to rule (mount) over the Jewish Nation (Zion), he will then continue to rule over the leadership (mount) of Esau as well.  Then kingship will entirely belong to G-d.

Moshiach will introduce the world to

It is no match.

They will not rule concurrently:  Talmud Megila 6a.

Esau will dominate This World and Jacob the Next World:  Midrash Yalkut Shimoni 110.

Magdiel rises to greatness... Rome:  Midrash Pirkei DeR' Eliezer 38. The meaning of his name "Magdiel" which contains allusions to the words "Magdil = increase/make big" and "E-l = G-d" meaning G-d has taken this tribe to greatness. This is the same meaning of "Rome" = high. (Gur Aryeh on Genesis 36:43). Also see the Radak's (Rabbi David Kinchi) commentary on Obadiah (in the beginning): "The early Romans were mostly from Edom (Esau)".

Rome = Western World:  As alluded to in Daniel's prophecy regarding "The King of the North": "he will exalt himself and magnify himself over every powerful one" (11:36) meaning that Rome will spread across the whole world like no other kingdom has (Ramban on Genesis 36:43).

It's interesting to note that there was one more chief after Magdiel: Iram (עירם). This name obviously shares more direct resemblance to "Rome". Indeed, the Midrash (Rabba, Vayishlach 83:4) writes he is called by that name for he will amass (Arema / ערימה) treasures for Moshiach. That is, its greatness will be used to support Jacob/Moshiach (Sefer Hasichot 5751 Pt.1 p.172).

Deliverers (will ascend up the Mount of Esau):  Obadiah 1:25. "Deliverers" in the plural alludes to Moshiach and his ministers (Metzodat David).

Moshiach being compelling:  "... And all the nations will flow to it [Jerusalem]... and they shall say, "Come, let us go up to the L-rd's mount, to the house of the G-d of Jacob, and let Him teach us of His ways, and we will go in His paths..." (Isaiah 2:2-3).  Note even though the nations are going up, they are "flowing" like water that gravitates down, as they'll be so attracted to Moshiach (MALBI"M's (Meir Leibush ben Yehiel Michel Wisser) commentary on this verse).

Jacob snatches the kingdom off Esau.

There's a deeper connection between Esau and Democracy...