Get insight into your game and improve your results

This is a slide presentation. To click through it:

PC or Laptop: Use left and right arrow keys on your keyboard

Tablet or Phone: Swipe left or right with your finger

Pianola Plus is a set of additional tools that you can add to your Pianola account.

They give you analysis of your bidding and card play, and provide you with a tool to replay hands with card-by-card guidance.

Pianola Replay will show you.

It lets you play any hand again, with

To launch Replay, click the "Replay this hand" button that you’ll see alongside every hand record.

The hand will open up with the contract that was played at your table.

Turn guidance on or off 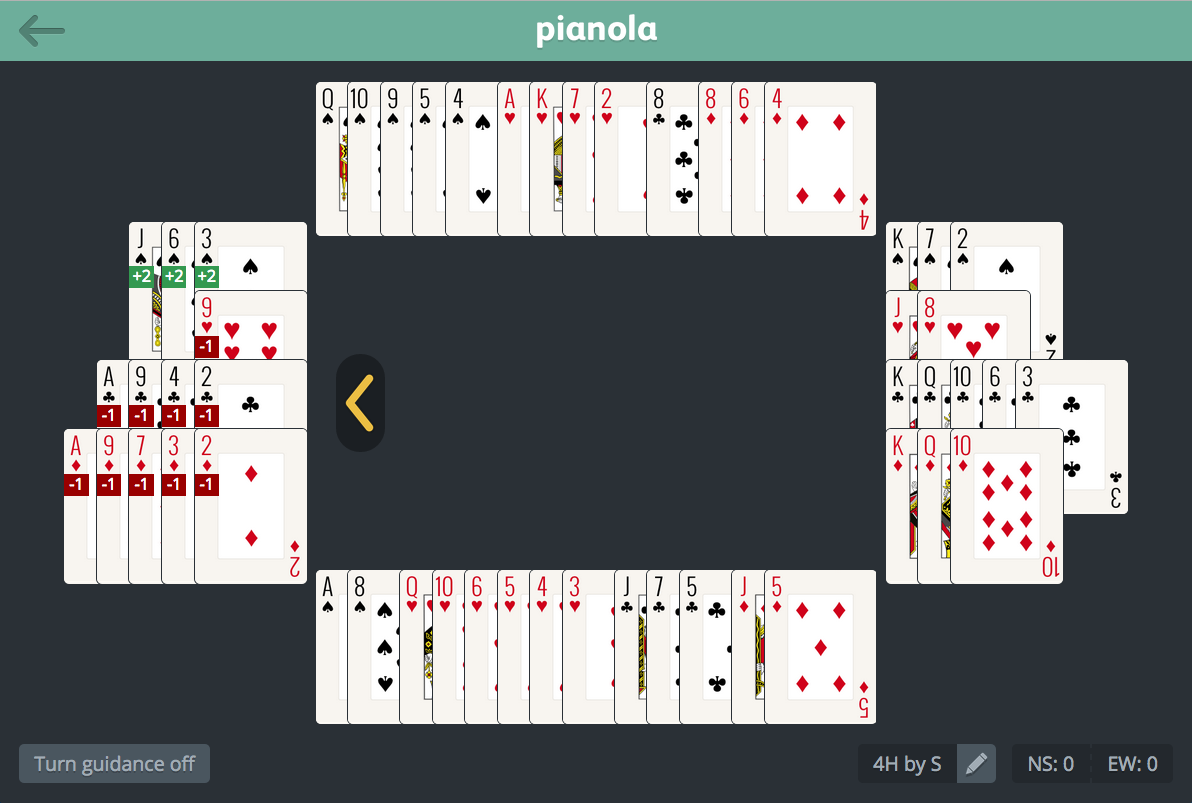 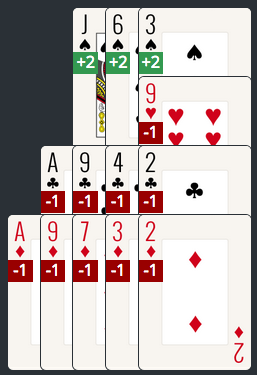 The labels on the cards show the outcome for the contract of each card played (assuming best play from that point on).

In this example the opening lead will either set the contract by one trick or give declarer two overtricks.

You don’t play the hand against the computer

Instead, you play all four hands and can choose to follow the advice or ignore it so you can see how the whole hand plays out.

Regular use of Pianola Replay will help you understand how to play the hands better by showing you the impact of each card you can play.

Watch this video to see a hand being played.

Move on to the next slide at any point

When you have Pianola Plus you will see additional data on the results history graph. These show your bidding accuracy and card play in comparison to the double dummy (or makable contracts), which is the theoretical optimum result for any given board. 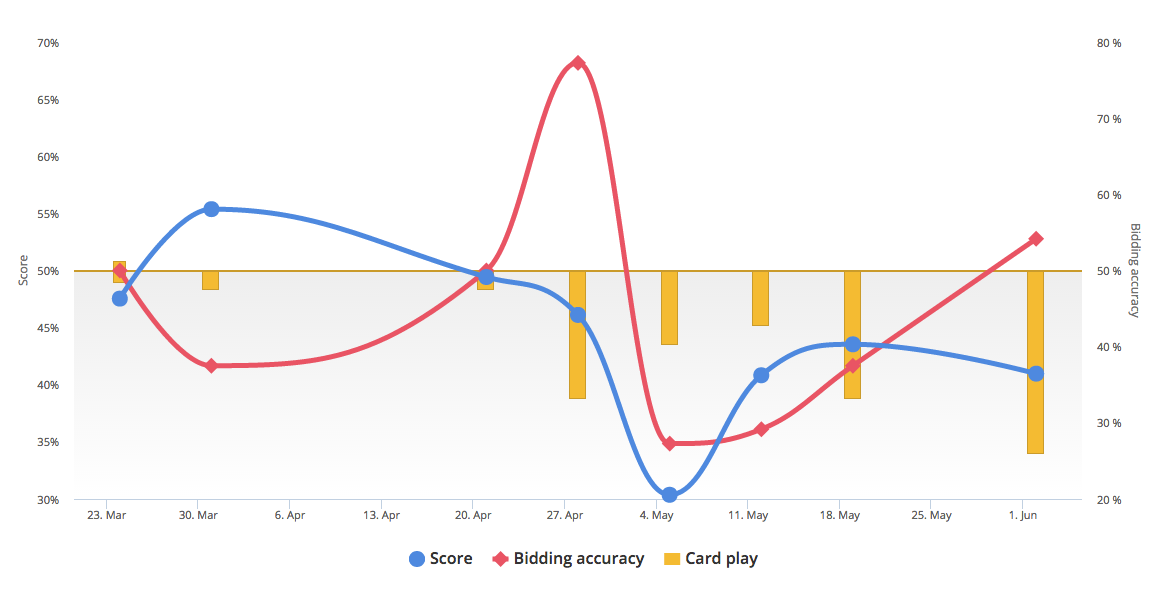 Pianola will assess whether or not you bid to the good spot, taking into account your vulnerability and whether there was a profitable sacrifice available to you. This is represented by the red line of the graph.

The bidding accuracy does not take into account how many tricks you actually won. It looks purely at whether you were playing in a good spot. 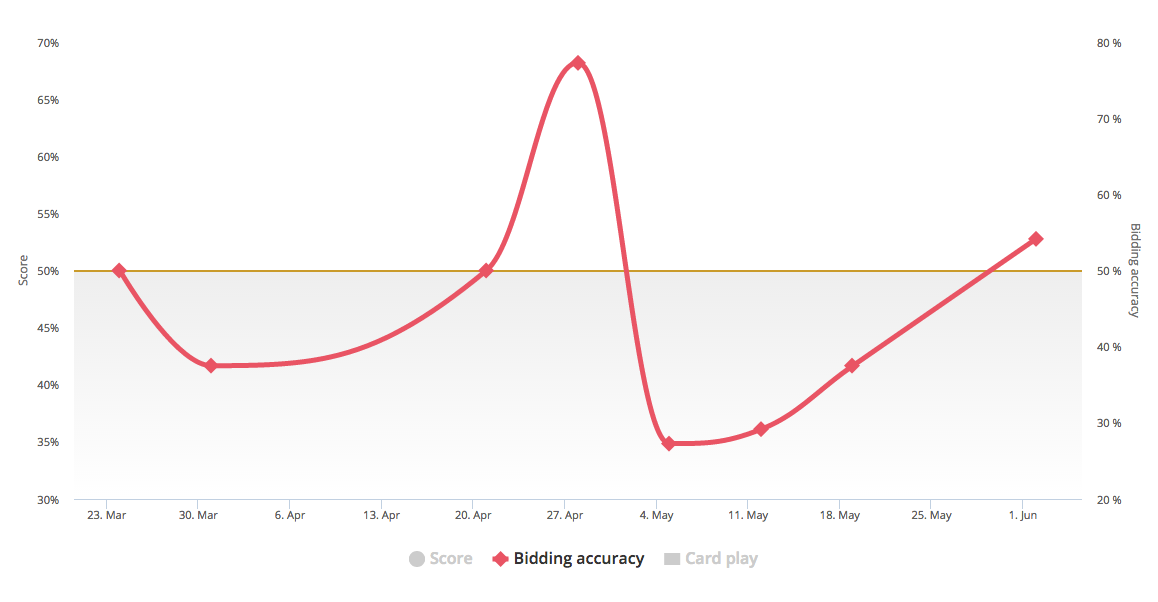 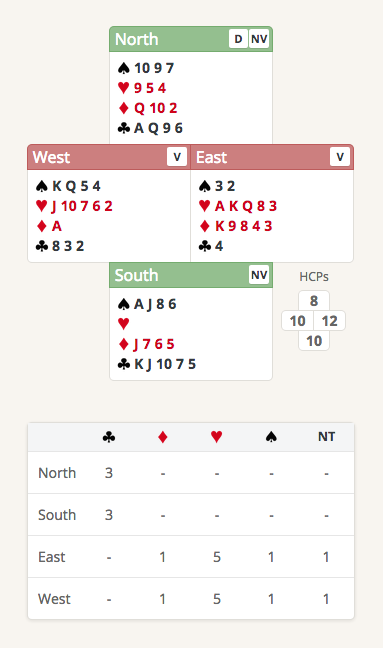 On this board, vulnerable EW can make 4H with an overtrick, scoring 650.

However, non-vulnerable NS can afford to bid to 6CX, which would score -500, when they go off by three tricks as expected. This is cheaper than allowing EW to make their game contract in hearts.

In actual fact, the optimal contract on this hand (also known as par) is EW bidding 6HX-1 to score 200. This is because neither side has a bid available to them that can improve on this score.

The yellow bars on the results history graph show you how many tricks you won above or below what you were expected to, according to the double dummy. 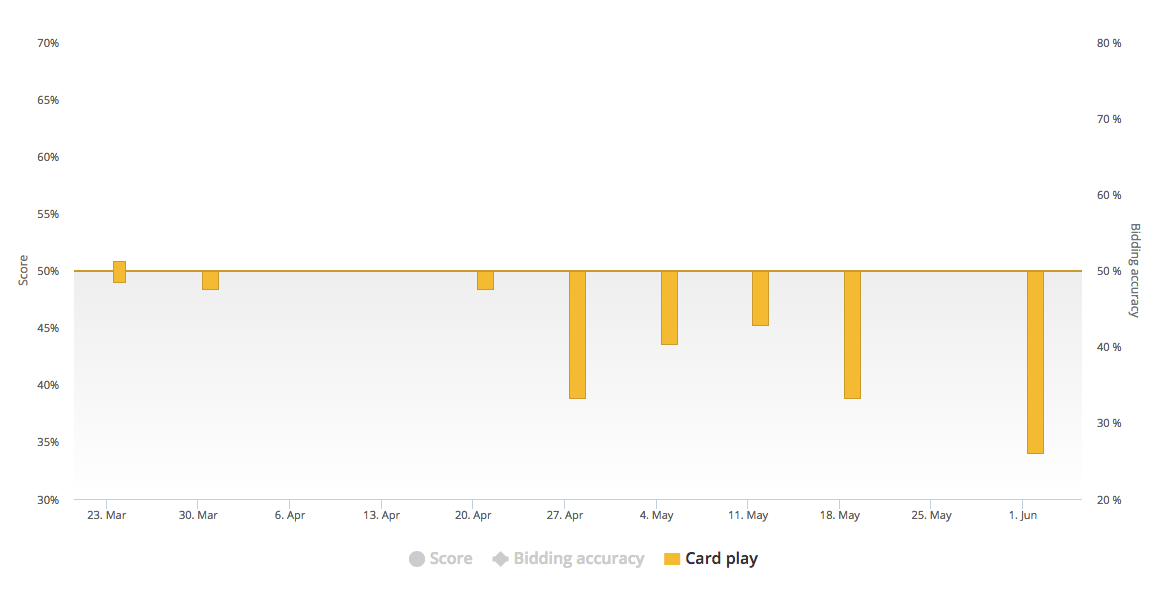 A session report is generated for every game you play. It contains detailed feedback on your performance in this game

The session report gives you a complete breakdown of the game:

A text summary of the game's results

Board-by-board breakdown of your score, bid, and analysis

This is a description of your average score when you underbid, overbid, or bid just right and whether you made more or fewer tricks than you should.

It also tells you what you scored on the boards where both your bidding and card play matched or exceeded double dummy.

This shows you which boards you played in each role and the average score for those boards.

If there was an arrow-switch or a change in polarity, you may have to tell Pianola what seat you took for the first hand of the game so it can calculate these stats.

You and your partner

The first chart shows your boards divided into four areas.

When Pianola says “good” or “bad” it is only in comparison to the double dummy - it’s not making value judgements about your game. 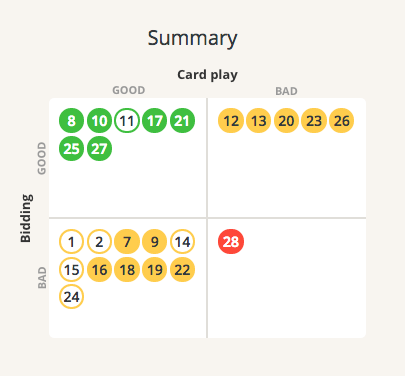 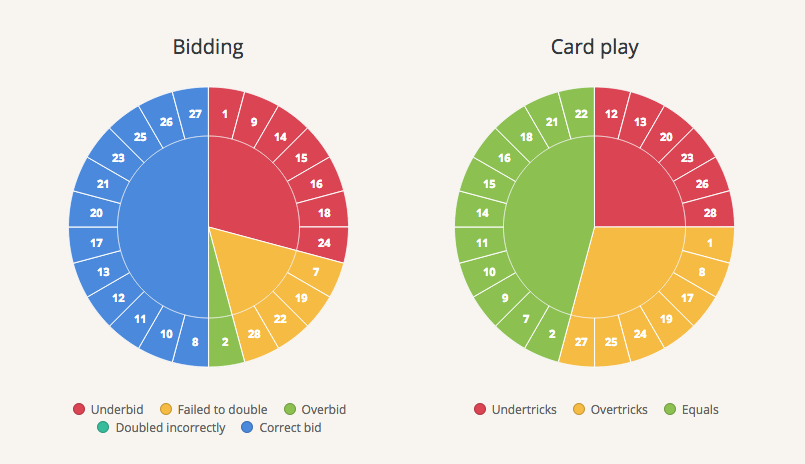 The next two charts show your bidding accuracy and card play for each board:

The top pie chart shows how your bidding compared to the double dummy.

On its own, this data doesn't mean much; you need to compare it to the characteristics of the bidding by the best in field, shown in the bottom pie chart.

In this example, our bidding was a bit better.

Again, by comparing your pie chart to the best in field you will see the gap between your performance and theirs.

In this example, my partner and I did very badly in the card play, which is why we got a poor score for the game.

In the table at the bottom of the session report page you will see a board-by-board breakdown of each hand, sorted from worst to best.

For each hand it shows the score, the bid and actual result at your table, the frequency of that bid, the bidding analysis, card play analysis, and the role you took on that board.

Move on to the next slide at any point

How to use the data

By studying the session report for each game you play, you'll soon start to see trends.

Maybe your bidding is fine but you need to brush up on your card play.

Or perhaps you're great at declarer play but fail to make all the tricks you should when defending.

By identifying your strengths and weaknesses, you and your partner can focus your effort in the areas where you most need to improve.