What is it about ?

The Context API is a component structure provided by the React framework, which enables us to share specific forms of data across all levels of the application. It’s aimed at solving the problem of Prop drilling.
Prop drilling (also called “threading”) refers to the process you have to go through to get data to parts of the React Component tree.
Before the Context API, we could use a module to solve this, which led to the increasing popularity of state management libraries like Redux. Libraries like Redux allows you to get data from the store easily, anywhere in the tree. However, let’s focus on the Context API. 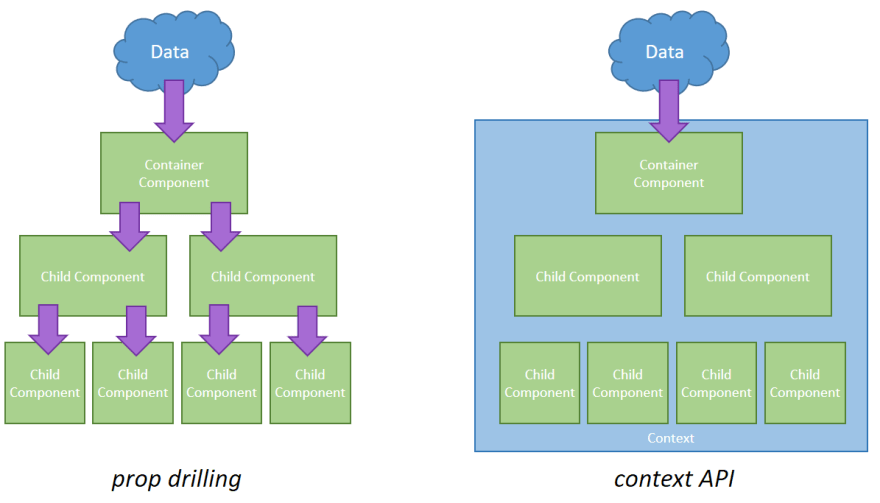 As with most component-based frontend frameworks, passing some form of data from one component to another is usually a real need. Typically it comes in the form of passing data from a parent to a child component or even child to parent components. This leads to components having data they don’t actually need, but they need to pass on down the tree.

This gets cumbersome pretty fast especially for certain types of props (e.g locale preference, UI themes, language settings etc) that are required by many different components within an application. The Context API aims to solve this problem, and provides a way to share data values like this between components without having to pass a prop through every level of the app tree.

The Context API has actually always been there but was considered experimental. Moving forward the API was improved to stability, and as of the release of version 16.3, the feature was made available and subsequently considered a new addition to the clan of features that make React a wonderful framework.

Before now many of the tools, we have been used to, like react-redux, react-native-flux, MobX-react, and react-router all used context to function, so you were probably already using and loving it, even if not directly.

2. Import it from React

First, we need to create the context, which we can later use to create providers and consumers

Once that’s done, we can import the context and use it to create our provider.

In it, we initialize a state with some values, which you can share via value prop our provider component

To make the provider accessible to other components, we need to wrap our app with it, just like in Redux

We’ll need to import the context again and wrap our component with it which injects the context argument in the component. Afterward, it’s pretty straight forward. You use context, the same way you would use props. It holds all the values we’ve shared in MyProducer, we just need to use it

6. Alternative, use static in classes

Leave the static propery as context type and access context in methods as using this.context