A plan so crazy,

We're blocked on all sides and on all fronts by big money.
There may be no way out.
But is there a way through?

Eight Billionaires,
each putting up $125M dollars.
on the biggest bet of their entrepreneurial lives.
They're betting that American democracy can be saved.
And if not, that it can be avenged.

Each billionaire has a "Passion Issue," or a "most important issue."  This could be engineering and science education, eradicating malaria, developing vaccines.

But these issues are blocked by systemic corruption. 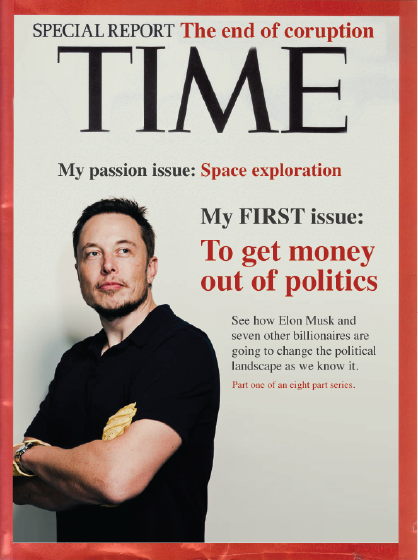 spend the money directly on their causes.
But, they realize they can do more good for those causes,
if they take on

before their passion issues.


These eight billionaires put $125m each into an escrow account.

(Hit down for more details or right for next slide)

Essentially, the billionaires are betting on whether politicians will act in the best interests of the people when those politicians are given incentive and political cover.
If not, they end up spending money to fight for reform instead of on the passion issues they really care about.
But if the gambit works, then they will not only have spent $125m on their cause but they will have created an environment in which that $125m will do far more good than it does now.

Why they'll do it: 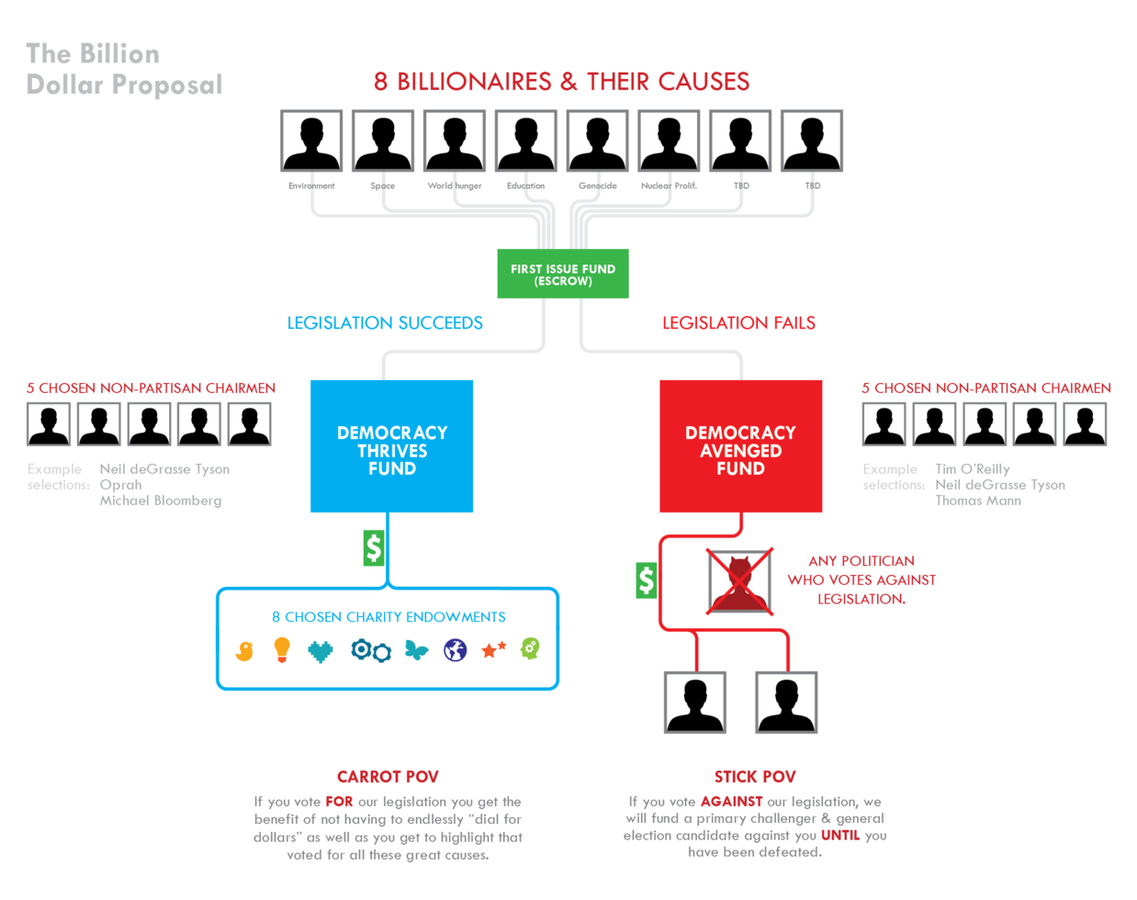 (Hit down for more details or right for next slide)

This plan will require a number of specifics not yet determined:
I believe that we should have Prof. Lessig's buy-in before attempting to answer these questions, though I have my ideas.

Some names for consideration:

There's also the 122 co-signatories of the Giving Pledge:
http://en.wikipedia.org/wiki/The_Giving_Pledge

Wait... how does the First Issue Fund differ from "a super-PAC to end all super-PACs?" 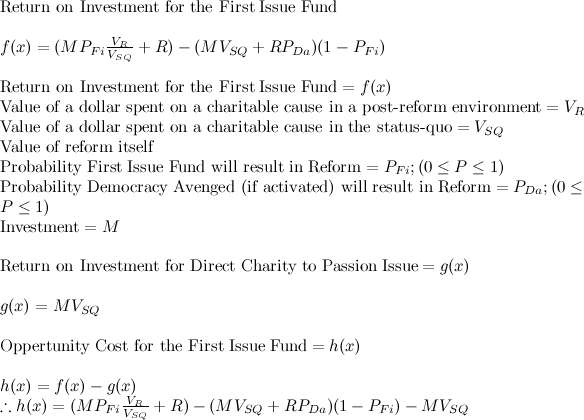 Here's the point: We are asking the billionaires to risk the same amount, but this plan produces no less chance of success, no greater risk of loss, and greater potential reward.
And where the plan is a risk compared to directly supporting those causes, that risk can be calculated, and smart decisions made for each investor.

Carrots and Sticks for Politicians

Vote for our legislation and:

Vote against our legislation and:

Succeed or fail, this attempt to "buy legislation" (even though it's legislation that would prevent people buying legislation)
will clearly and publicly illustrate the problem.
We also have leaders of industry coming forward in a very public way and saying: "We understand that we all have 'passion issues' but we must solve corruption first."

Here's how the game theory breaks down:

There are enough positive and negative incentives that both altruistic and self-interested politicians will support the plan, and therefore, choose to pass reform.
We can have a
Republic, Regained.
(Hit down for more details or right for next slide)

If opposed by a competing billion-dollar SuperPac, this arms race would lead to disgust among voters making it easier for pro-reform candidates funded by the "Democracy Avenged" fund to win. They may win the battle against specific reform but lose the war resulting in electing more reformers to Congress.
Such a long, protracted and expensive battle with unclear results would be risky and more importantly, less profitable.
If this move does not "checkmate" Sheldon City, we at least force them to make a move which reveals their intent to the public, and allows them far less room to maneuver in the future.

While there are several counter-strategies available to crony capitalists that seek to extend the current system of corruption, all of them have negative consequences; in short, we may have them in a position where any move they make can be used against them.
(In game theory, this is known as Zugzwang.)
More Details: http://goo.gl/LpdwrQ