I come from Italy. I've been a programmer since 2009.
I started as an iPhone Developer, but I am a language geek and I like learning many strange and different programming languages:
Objective-C, Clojure, Erlang, Lua, Python, Javascript, C, Boo...
My favourite language is Clojure and I attend the Liverpool Clojure Dojo at DoES every month.
( https://liverpoolclojuredojo.eventbrite.co.uk/ )
Currently at work I use Unity and develop in Boo, a rather interesting Python-like language.

Unity 3d ( http://unity3d.com ) is a very popular game engine which has a free version and a lot of tutorials available.
C++ never gets old and is still very much in use, if your dream is to work in AAA games you would do good to learn it.
Server/web developers are becoming more and more important due to freemium games requiring big server infrastructures to handle millions of people buying things.

It's telling the computer what to do in a completely unambiguous language.
Computers are very "stupid", your instructions must be extremely precise.
Programming languages are especially constructed languages built around computer's limitations.
The code once written is translated into 0s and 1s, which are the only two values really available, all other values are built piling a lot of 0s and 1s.

THE MOST IMPORTANT THING

if you want to learn to program is:
Learn how to set up a development environment then
look for tutorials online, and most importantly type all the code in the tutorial: don't copy and paste.
The muscle memory in the fingers helps a lot in making programming as natural as speaking.

By typing code your brain gets used to it, and things will start to make sense much sooner.
You cannot skip this: a theoretical understanding of programming is not enough to actually code, much as expressing yourself in an human foreign language doesn't actually happen with any fluency unless you practice a lot.

A powerful programming language lurks in your browser:

To interact with it open Chrome's Javascript console:

It's a ready to use development environment that doesn't need complicated installations of software.

Chrome's console allows us to have a "chat" with the computer, in the Javascript language.
We write a line of code and then by pressing return we get immediately an answer from the computer.

Getting the syntax right is very important as the computer will understand your code only if it perfectly follows the syntax rules.
Much of the errors that will appear when you code are syntax errors, they're easily solved and you shouldn't fear them.
In general you should never expect to write everything correctly the first time, it's ok to write a slightly wrong thing and fix it when the console complains.

We haven't talked about objects yet, but it's not important to understand everything at once.  Every little bit of familiarity helps and piles up. It's common while learning programming to do more than one pass at something. 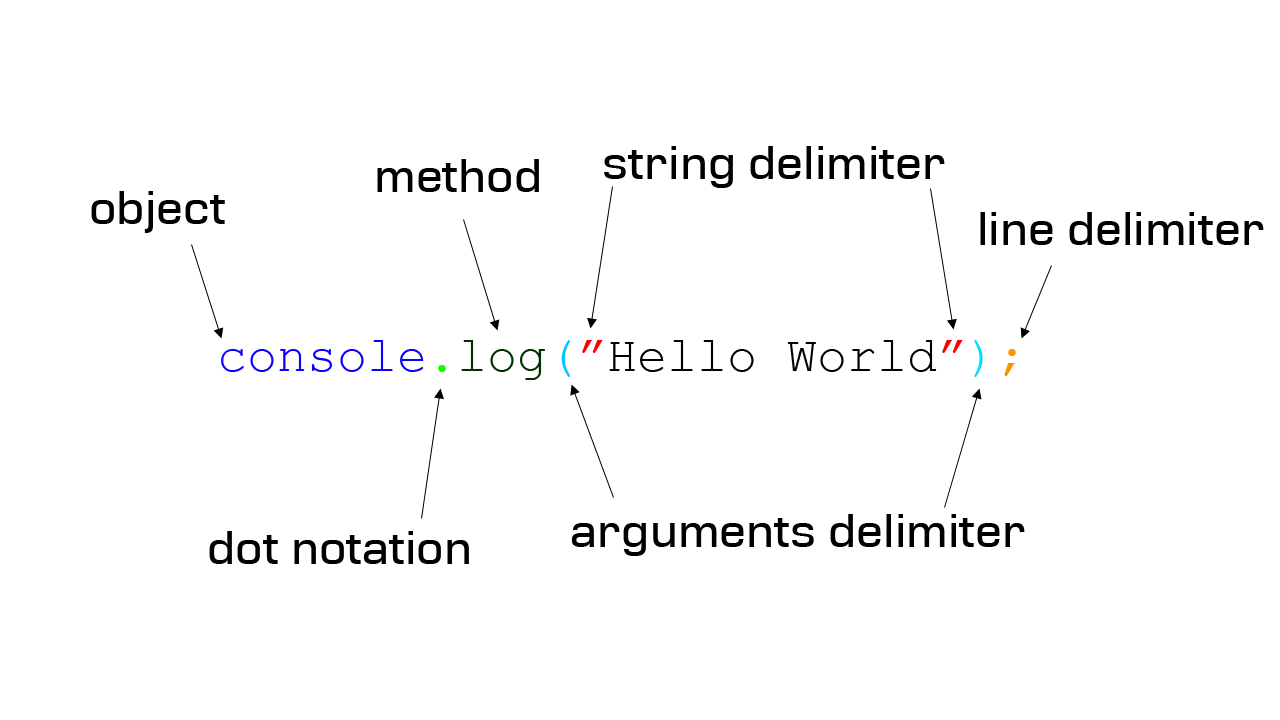 Variables are named bits of memory in which you store a value. They are of many different types.

Some common types. You may have heard of float and double numbers, they're just numbers like this:

In javascript all numbers are double numbers, actually.

Functions are named groups of instructions you can call to execute them in your program.
Defining it:
Calling it:

Decides whether to execute a bit of code based on a condition:

Are useful for making the computer do the same thing however many times you want.


Has the same result of:

An array is a type of variable that can contain other variables, in an ordered sequence.

The sequence numbering starts from 0:

An array is a type of variable that can contain other variables, by giving each a unique key.

to get your value back you use brackets notation:

You can go through an array or a dictionary in a for loop, without knowing how many items are in there.

INCORRECT
Javascript has no enumeration ^^;;
Enumeration is found in many other languages: C#, Python, Lua and more.

They're two different syntaxes for the same thing. Both work, but you can do more things with bracket notation. 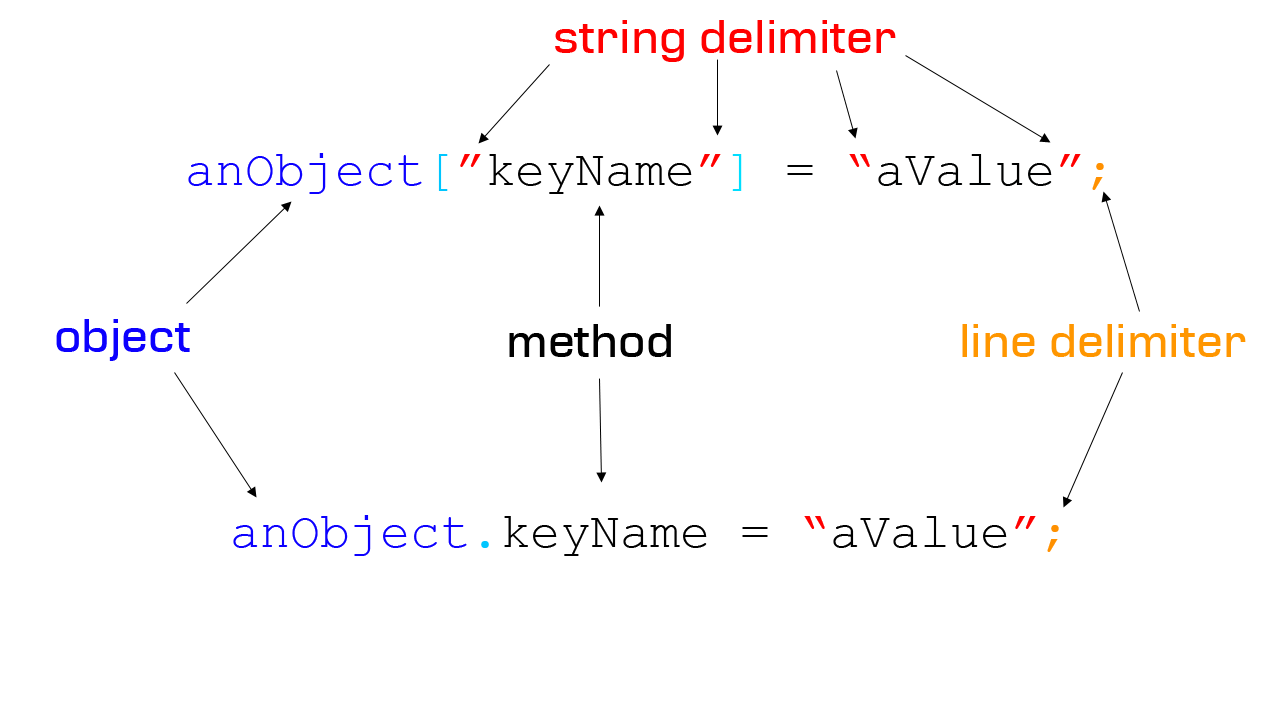 Since Javascript is an "Hash" language, objects are just hashes (aka dictionaries).
(note that dot notation is preferred)

A quick way to write javascript.

(You'll find all the code for this workshop on JSBIN:

Easy to try out javascript libraries, just by using the add library button. A library is code to do some specific thing that someone else has written. There are many free libraries online. 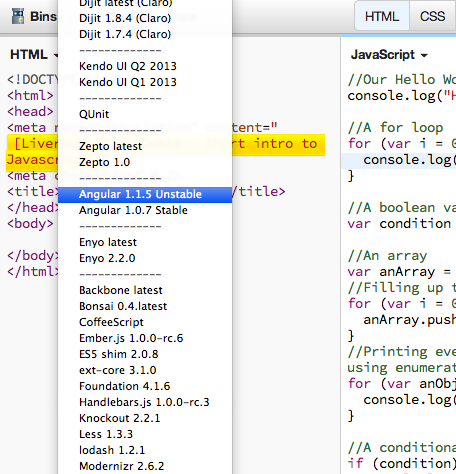 The most popular WebGL library. It lets you show 3d objects in a web page. We can try it out quickly with JSBIN. 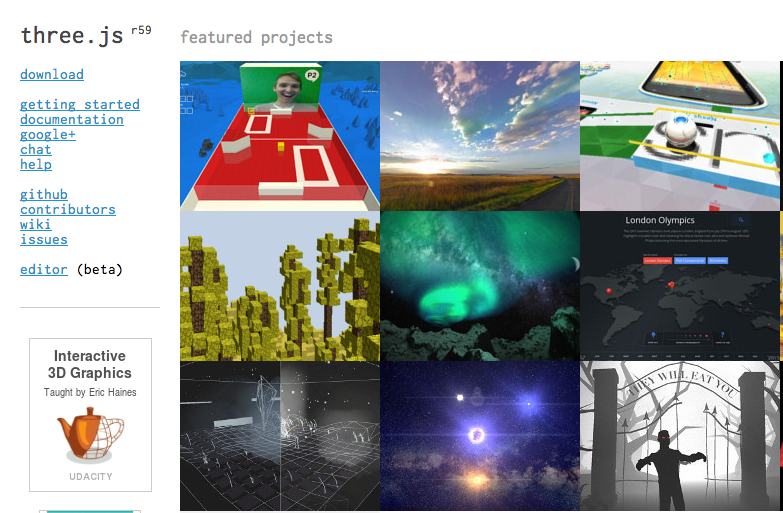 USING WHAT WE LEARNED

Use this JSBIN page:
http://jsbin.com/ihikug/4/edit 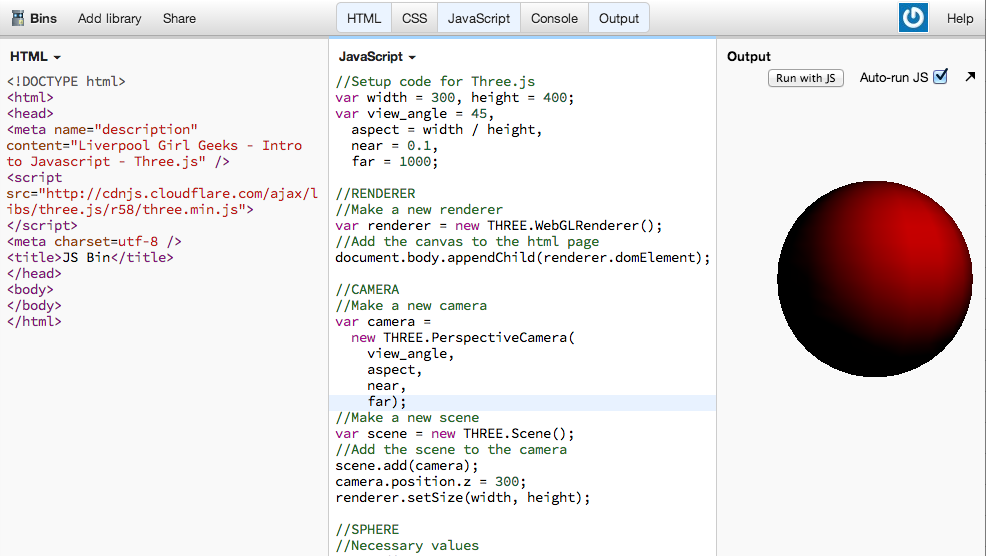 To make a 3d image with Three.js you need 6 things:
The code is pretty long, so it's more than we can do today, but one quick thing we can do is modify values and see instantly how the rendered image changes, since JSBIN runs the code automatically when we change it.

We can change the radius of the sphere:

The color of the light:

We can add a for loop so that we have a few more spheres:

I had to change the position of the spheres depending on the variable i otherwise each one would have the same position and they would hide each other.
( http://jsbin.com/ihikug/3/edit )

Any questions?
Hope you had fun.