How I CoDE IN unity

How I've been using unity in Stupid ways for 5 years

-A talk / cautionary tale by-

This talk isn't by any means the
definitive "how you should use unity".
It's just the mistakes I've made and some of the
processes I use when I'm writing code in unity.

Also, lets keep it informal
feel free to ask questions during the talk.
These slides are already online .
(http://slides.com/cratesmith/how-to-use-unity)

What else DO I do?

What I'm here to talk about

I started using unity almost 5 years ago.
At that time there wasn't any considered
"best practice" for using the engine.
Like most people, I made a lot of mistakes.
But lets just focus on the big ones

THe First mistake I made

Making everything out of "generic" components.
It's very tempting to think you can create
every object in your game out of "reusable"
"well written" "modular" components by assembling
collections of them in the editor.

This is what happens

Why this is silly

Your "clean" and "modular" code instantly goes to hell as you try to cover all the edge cases needed by every object in your game.
The inspector gets filled with parameters that don't relate to the object you're working on.
Your project becomes a nightmare made from "order of Update/Awake" bugs.

THE SECOND MISTAKE I MADE

SendMessage and Editor Logic.
On the surface, SendMessage doesn't seem like a bad idea. You SendMessage an "event name" and if any component on that object has a method with the same name, it gets called.
Editor logic also seems like a great idea, you have a button in your level or in the user interface. Instead of linking them by code you put a UnityEvent or EventDelegate in the inspector.
That'd keep things simple right? 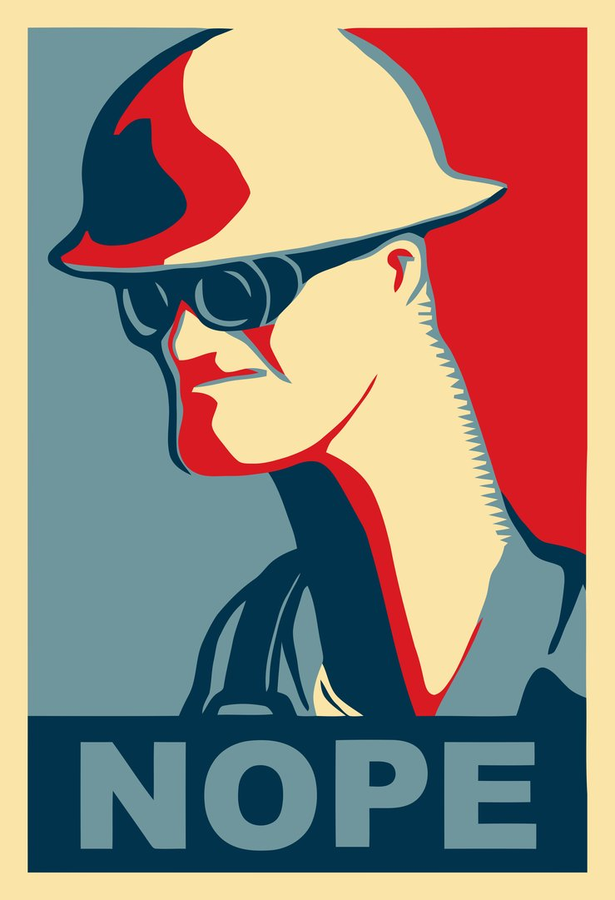 SendMessage is great in theory, but a pain to debug and work with. I've had problems where it wouldn't appear in callstacks, it misreads null as "no parameter".
And editor logic and visual scripting tools are great until a point, after which they become complex, impossible to debug... and completely indecipherable to anyone but the person who set them up.

Short version. I only use these features when I have to, and even then I do so very sparingly.

THE THIRD MISTAKE I MADe

Like nearly everyone in the games industry,
I didn't make use of automated testing.
There are awesome testing frameworks around. Unity even has one on the asset store that is deeply integrated with the engine.
Automated testing = you spend your time making game, instead of spending time figuring out why it's not working.
I'm a firm believer that it's more fun
to be writing tests than fixing bugs.

My FOURTH, and biggest mistake

Assuming that in 24 months time I would
remember what components I need to manually put onto
an object so that it works as intended.
Without fail I will always forget this stuff.
From now on all my code is written so that future Kieran
(or anyone else) can pick it up and actually get on with things.

HOW I do this now

I have a process for writing programming objects in unity.

Each object gets a "core" component
called ActorObejectType
This component is the place for
all your object-specific code.

This code is single purpose!
It can be as dirty, over-specific
and hacked up as it needs to be.
After all, we're making games here,
not pretty code.

Copy and pasting is evil,
even in actor components.
I don't do it.
Instead: Common functionality gets put
in non-actor shared components.

how I write a shared functionality/

It's an attribute that you attach to a monobehaviour class .
It will add the required component automagically
and prevent users from manually removing it using the inspector.
It basically guarantees that
your actor will have that component.

The way you expose parameters to the inspector can make all the difference for your programming and design workflows.
A good parameter is...

[SerializeField] members appear in the inspector but  are NOT accessible from other classes/components.

Public members also appear in the inspector but CAN be accessed from the code of other classes & components.
General rule, make all parameters as [SerializeField] you can convert them to public if you need to later.

They clog up your code auto-complete windows with variables you're not interested in.

They require more work & testing as they need to be able to be changed at any time without breaking anything.

Object parameters in the inspector can accept a component/asset/object of that type... or any object derived from it.
A very common practice is to reference just about every asset/prefab/object as GameObject.
This tragedy has to stop.

Common example; I have a cannon.
The cannon has a parameter for the
prefab for the object it will create when it fires.
Whatever, lets make it a GameObject
so it could fire "anything"
So the code creates it then... and immediately has to check if it has a bunch of components, rigidbody, damage type, bullet owner.
That's a lot of assumptions.

DO I really need aN INSPECTOR parameter for this?

HOW DO I KNOW IF I NEED AN INSPECTOR PARAMETER?

It's fine to temporarily make anything an inspector parameter while I'm working on something new but before I check any new code in I ask myself the following two questions.
Will designers need to play with this variable?
Will this variable need to change for different objects/prefabs?

If the answer to both is no, it's better to be a code constant for now.

Make it work out of the box

If it's possible to do so,
adding an actor component to an empty GameObject and
pressing play should work with basic behaviour.
If not,
it should give very clear warnings as to what needs to
be done to make it work.
(this is a great thing to use automated testing on!)

Know when to break the rules

If following the rules isn't going to help the game
get done faster, it's probably time to ignore them.

SERIALIZABLE Classes in the inspector

One neat thing you can do in your components is
have internal classes that show up as collapsable groups
int the inspector.
I don't have a fixed rule about how I use them,
but they're really handy
So lets do some examples. 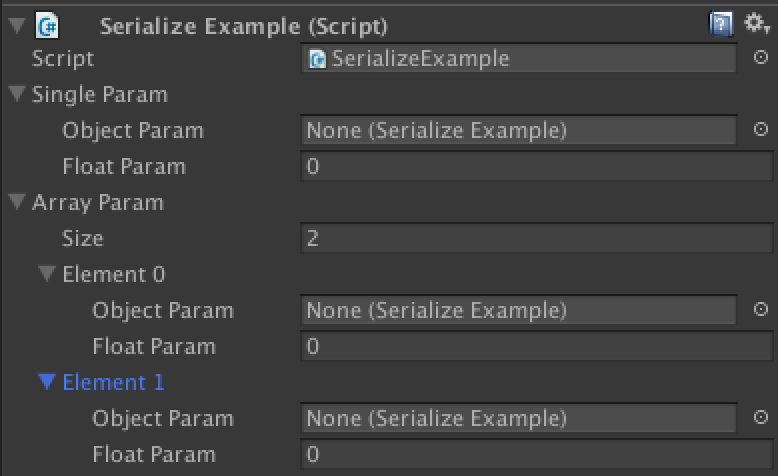 This is what the above code looks like in the inspector.

A not so basic example


A NOT SO BASIC EXAMPLE

There's a couple of things going on in here

This is how I handle complex actor classes

One MAJOR problem in unity is sharing information
between prefabs.
Prefabs are atomic, so if you have DudeWithGun and DudeWithGunB you often have to make sure you always
update all your prefabs.

The method I use to get around this
is to have custom asset types.
These are assets you can create in the project window
that can store whatever you want
and prefabs/objects can reference them to share values.
In fact you can do insane things with these
(like augmenting the Mecanim Animation system)

Back to that example from before.
So instead, we give create new asset called GunInfo and give it some values.
In our ActorDudeWithGun class we add a parameter that accepts a GunInfo.
Now everything in the GunInfo asset can be shared between multiple prefabs!

A simple custom asset From scratch 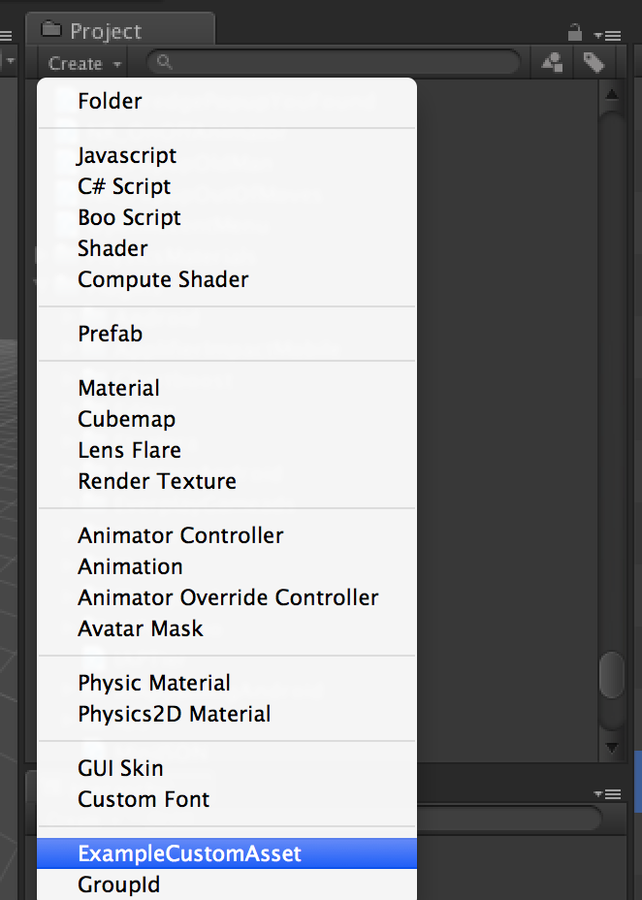 put a png image in Assets/Gizmos named
"{Classname} Icon.png"
the name of your custom asset type and it'll use it as an icon.

Now they're no different from in built unity types!

Use a custom asset builder

I'm even lazier than that.
Adding a custom asset builder method every time
was a hassle so I built a tool to automatically do this.
You can grab it here.

Just make classes that inherit from CustomAsset
or give them the [CustomAsset] attribute and they'll
automatically appear in the create menu.

How To use unity