Released in 2006 by John Resig based on a bunch of helpers he regularly used.

Developed in the Wild Wild West of the browser land

Say no to jQuery 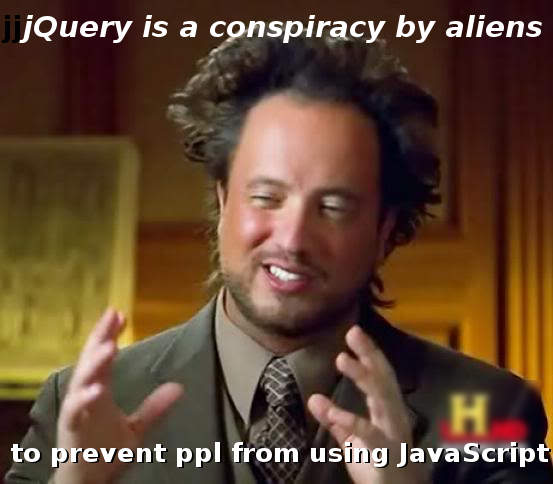 and that too in a simple way

Performance Stats have, by now, become a joke

The slow parsing  of scripts on mobile browsers like Android forces us to use small JavaScript libraries.

but remember to pick the right one

"The simplest (and safest) classes of cross-browser fixes are those that exhibit two important traits:

Does Browser Support Everything

Only what you need

Importance of reducing Round Trips

80% of the end-user response time is spent on the front-end downloading all the components in the page: images, css, scripts  etc. Reducing the number of components in turn reduces the number of HTTP requests required to render the page. This is the key to faster pages.

How about
loading jQuery from a 3rd party CDN

" 81.9% of the websites use none of the JavaScript content delivery networks that we monitor.


Google Hosted Libraries is used by 15.8% of all the websites, that is a JavaScript content delivery network market share of 87.3%. "

in the Real World

Native methods will almost always be faster, but in the vast majority of cases it doesn't matter.

"I tried using the browser’s native innerHtml and getElementByClassName API methods instead of jQuery’s html and append. I thought native APIs might be easier for the browser to optimize and what I read confirmed that. But for whatever reason, it didn’t make much of a difference for Trello."

But does it lead to faster site

" we found that lighter file size did not translate into better performance overall. Sure, Zepto downloaded quickly. But once loaded, it wasn't quite as fast as jQuery. It didn't help that many third-party plugins required jQuery, not Zepto — in fact, we found that some third party JavaScripts conflicted outright with Zepto."

if something is slow use plain js. Mix and match for performance

At the very least, make sure you know what jQuery is doing for you, and what it's not.

Worry about the size of jQuery after you have

What are the top 300K sites doing

What are the top 300K sites doing

Add Class to all p